You are here: Home / Chronicles / Abia Governor, Okezie Ikpeazu, has been deposed. God is surely involved in this I believe. 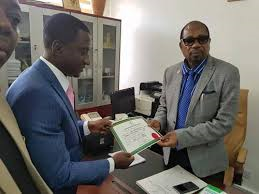 The Governor(is he still?) of Abia state, Okezie Ikpeazu is in trouble.  He has been told to just “disappear”. INEC has withdrawn the certificate of return from him and given it to Uche Ogah. Uche Ogah contested against Ikpeazu in the Primaries but lost due to the former Governor’s Abracadabra. As we speak there is pandemonium in the state house. Ikpeazu should consult his prayer warriors because the situation is not looking good. His problem arose from the fact that he presented fake tax documents. He didn’t clean up his acts and his opponents detected him. This is a serious issue for him. Now that he hasn’t gotten any immunity (like Fayose) he can be arranged for forgery. Someone should tell Ikpeazu to run for cover because wahala dey!!

Abia state has suffered. Abia state is a state that is cursed with bad Governance. The Governors that Abia has been saddled with all along just came to steal and rape the state’s treasury to stupor. They never did anything tangible to that state despite the revenues that had been accrued by the state. Federal allocations to the state have been taken as the Governors’ money. This has been Abia’s sad  governance formular.

If you doubt me, please take a trip to Aba, the commercial nerve centre of the state. Just do it if you can spare the time. You will wonder whether there is still a government or not. Aba has a market called Ariara international market. This market is a market known all over Nigeria. However, driving into that market is horrible on a non-rainy day. You only need to pray hard if you are driving into the market during raining seasons. The roads in and out of the market are terrible.  Coming through the Portharcourt-Enugu express way is not good. Entering the market through Faulks road is equally horrible. Yet billions have been allegedly  spent on the Ariaria link roads by both Orji kalu and Theodore Orji in the last 16 years without any tangible result.  That area has turned to the money milking factory of the Governors. Another road is portharcourt road, please don’t try that road. If you drive through that road on a rainy day, don’t blame anyone for your misfortune.  I can go on and on..

Uche ogah has a chance to re-write history. He has a glorious chance to put Abia on the map.  He is neither beholden to Orji Uzor Kalu nor his friend turned foe,Theodore Orji. He is on his own. He should remove the curse of stealing placed on the governors and make things right. He should let us believe that Abia can be run by real people who are not thinking of how to raid the treasury. He should make us believe that an Igbo man can successfully run a state like Abia with human face to the citizens. This is the time to say enough is enough to rogues and plain robbers.

Uche Ogah, for now, the floor is yours make proper use of the time allotted. Ikpeazu should go and tell his Godfather Theodore Orji that the game is finally over. Until the appeal court rules otherwise, he is on his own…Ewolewoo!!