You are here: Home / Chronicles / Adoke and Ngozi okonjo-Iweala must vomit US$1.6 billion. They’ve got no choice!! 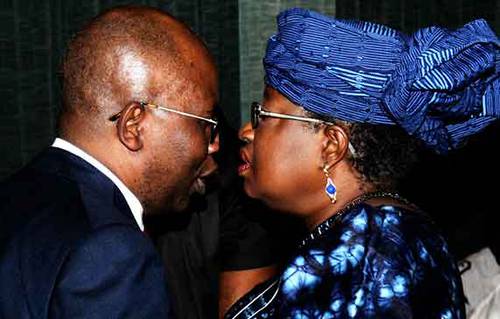 This is turning to a country of deals I tell you. Recently, the former minister of Justice and Attorney General of Nigeria Mohammed Adoke was forced to come out of the hole he’s been hiding. He was made to talk. He said that the US$1.6 billion that disappeared from the Nation’s treasury was not his fault. Instead, he blamed the former minister of Finance, Dr Ngozi Okonjo Iweala. Adoke said that he was only “nominally involved” but the major person should be Ngozi Okonjo Iweala not him. Smart guy!!

What was the issue? There was a dubious court case that resulted in the court awarding about US$3.2 billion dollars against the FG in favour of 774 local governments of Nigeria. This was a 1992 case that the court, retroactively, used the 1999 law to adjudicate in 2013. The Judge was a very “wonderful” guy working to an answer.

In a very strange twist, no one appealed the case, even why it was clear that the whole stuff was a fraud. Out of the blues US$ 1.6 billion out of the US$3.2 billion was released by the finance minister, with the approval of the Justice minister. Pronto! The money was paid. If you are involved, or been involved, with finance challenges with the FG or any government at any level in Nigeria, you would appreciate that the quick payment of a court-ordered  US$1.6 billion by the government is out of character. The story hasn’t finished o!!

I still wonder how Nigeria is moving on in the face of this apparent robbery. Mind you, Dr Okonjo Iweala is not used to silence in this kind of allegation. However her ominous silence is quiet telling.

This is a direct imitation of mafia playbook. This is an action that was planned with the mind-set of using judicial cover to create the needed loopholes. However, they made a critical mistake. They underestimated the determination of some Nigerians in seeing through the veil of criminality they perpetuated. My shout-out to Anti-graft coalition, the Civil Society Network Against Corruption (CSNAC). They saw through this and brought it out.

It is simple: Mohammed Adoke, Okonjo Iweala and Joe Agi must be made to pay back $1.6 billion dollars to the federation account. In the alternative pay the 774 local governments as the ruling directed. No stories here!!

They cannot spin this out of reality. A thief is a thief….Ewolewoo!!