You are here: Home / Other News / AGF vs George Uboh on looted funds: When a thief is contacted to…. 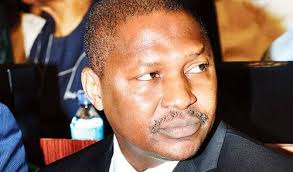 There is a gentleman called George Uboh. Remember him? In my opinion, he is a major reason why Ibrahim Lamorde(Former EFCC chairman) was practically chased away from the EFCC.  Then, he petitioned the senate that EFCCC, and lamorde in particular, couldn’t account for about 1 trillion naira which forms proceed of the recovered funds by EFCC  so far.  When Lamorde was called to answer the charges, he ducked and ran away.

Mind you George Uboh has been known as an ex-convict  in the US when he came to complain about Lamorde. He was under investigation by the EFCC when he wrote the petition against Lamorde. He already had the baggage of a “trouble maker” and career crook. However, despite all these, the attorney General of the federation appointed him as a recovery agent for the federal Government.

George Uboh went to work and started tracing looted funds in Nigerian banks. Did he see some money? Yes he saw some. According to him, since the brief was given to him in February, he has been able to trace 47.14 billion naira, US$598.7 million  and 23.5 million british pounds. This fact was not disputed by the Attorney general so I assume there’s substantial truth in this. As a con man who knows how to search for hidden money, he became a pain in the neck of the banks. The banks had to get in touch with the minister with their complaints. The attorney General acted and removes George Uboh swiftly as a recovery agent.

The attorney general claimed that George Uboh was removed because he acted beyond his brief. More importantly, that he didn’t disclose the fact that he was an ex-convict in the U.S. He also did not disclose the fact that he still has unresolved   legal troubles in Nigeria. These were valid reasons I wouldn’t lie. However, they’re stories that almost everyone knows about George Uboh. That the minister of Justice and the Attorney General of the federation just knew about it is baffling to say the least.

The real questions should be asked; at what point did the minister recognise the fact of George Uboh’s history? What particular account(s) was George Uboh getting close to that made the minister remember his(George Uboh’s) past demeanours?  The minister needs to tell Nigerians about the money that Uboh has traced already. We need to ascertain if what he said was true.

This says a lot about our system. It takes a thief to trace where the looted funds are in the system. It takes someone who is well at home with the “kurukere manipulation” of what we term as our economy to fish out looted money. He is so aware of the criminal distribution of funds that he was able to know the ways and manners banks hide the funds in Nigeria.  This is our story.

George Uboh just depicts the adage in some quarters: It takes a thief to catch a thief. Our system needs to reform for everyone’s good…Ewolewoo!!