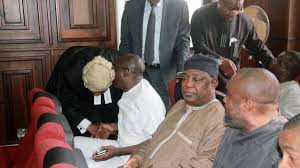 There is a certain individual who used to be the Chief of defence staff in the last administration. His name was and still is Air Marshal(RTD)Alex sabundu Badeh. This man is being accused of chopping a whopping sum of 3.8 billion naira of airforce money. Do you need any more reason why the airforce planes were finding it so difficult targeting the Boko haram thugs?

I remember this guy very well. Immediately Former President Jonathan appointed him as the chief of defence staff in Jan 14th 2014, he just went nuts. In the first press conference he held in that position, he promised to end Boko haram in 3 months. Did he? Wu sai!! He couldn’t achieve naadaa!! However, we should have known better.

The man just used his first press conference to give us a wicked and unassuming metaphor. He ‘implied’ that his billions would start rolling in 3 months, though he announced that it would be boko haram that would be killed in 3 months. Or else, how do you explain a situation in which only one individual would be accused of 3.8 billion naira at a go? Yet he was fighting Boko haram!!

I can still recollect what happened when it was clear that Boko haram insurgents were pushing towards his village(Vintim) in Adamawa state. You know what he did? He just made arrangements to evacuate his relatives before the insurgents took over the town October 30th 2014. Wetin concern am? He was just there for the money and he made the money. Badeh na you biko o!!

When he was even asked about the fact that Boko haram overran his village, he was very unapologetic about it. He just told anyone that cared to listen that it never mattered. What we didn’t know was that what mattered to him was the money he was chopping.

He lost his job in July 2015 as the government changed, but he decided not to keep quiet. He gave an interview sometimes in October last year saying that the military was underfunded and unmotivated. Can you imagine that? This came from the same man who has chopped the military’s 3.8 billion naira? Nigeria is a very pliable country o!!  A man who wacked money then claims sainthood? This is wonderful!!

You can now see the result of the beautiful estates springing across opulent areas of Nigeria. You can now imagine how your money is used to build palatial mansions in V.I, Ikoyi, Maitama and other areas by Government people “covered” by the fronts called estate agents and developers  across the cities. Badeh is an example of how not to lead a military in war condition. He is wicked, mean and unconscionable looter.

Badeh should thank his stars that he is in Nigeria where he can use part of the funds to run the normal “rule of law” campaigns and bribe our judiciary out of common sense. I only hope the Judge on his case would take “judicial notice” of the military, and more specifically the airforce men, that have perished in this Boko haram war.