You are here: Home / Chronicles / Alli-modu Sherrif: All hail the New PDP chairman… 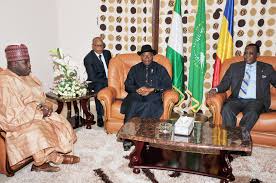 Wonders can never end I must tell you. Wonderful things are always happening everywhere. One of the ‘wonderful things’ that happened is the selection of Alli-modu Sherriff as the new chairman of the PDP.

If you are looking for people that you want to tag with alleged Boko-haram sponsor, please look no further.  This man was once detained by the Cameroonians on the allegation of links to Boko Haram. He only got off the hook because GEJ spoke to the Cameroonians. He is still under investigation by our security services on Boko Haram issues. He is entangled with Boko Haram wrappers. This is strange..

The only surprise I have about Modu sherriff is that he is still a free man. A lesser individual with that kind of tag on his head would not have known the difference between living alive or living-dead. He would have been detained by the secret service without any opportunity of getting  bail. This man called sherriff was the former Governor of Bornu state that has been totally destroyed by  Boko haram yet he feels no sense of shame nor remorse for his people.

That Sherriff is rich is in no doubt. However, that seems to be the main barometer that was gleened through in selecting him and making him a “saint”. You know it’s a major problem if you are poor in Nigeria. You can commit “murder” as a rich man in Nigeria and you would go scot free. In a poverty stricken society like ours, you just need to have enough money to ‘buy’ over the institutions and you would be very fine. Modu  sherriff, as a grounded politician, understands this scenario and he is using it to his advantage. The way money speaks here can be equated to God speaking I tell you.

I can still recall what he did when GEJ was in power. He followed GEJ to discuss about Boko Haram with the Chadian President, though he was under investigation for supporting Boko Haram at the time. This man surely knows how to manoeuvre and I must give him credit for that.

Modu Sherriff is a dangerous being masquerading as a politician in this country. Any strike by Boko haram is a further  validation of Modu sherrif imprint.