You are here: Home / Chronicles / Amaechi vs Wike: A tale of frenemies in a “criminal world”. 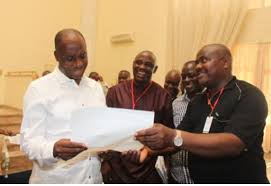 Amaechi vs Wike:  A tale of  frenemies  in a “criminal world”.

I still remember my sojourn in Portharcourt when Amaechi was shown the wrong end of the stick by OBJ in 2007. I still remember what happened in 2007 when Peter Odili just came out of his room and declared that Amaechi would be the PDP gubernatorial candidate before OBJ came into the show and scatter everything. I can still recollect how Omehia was brought out of the blues to become the PDP nominee after Amaechi’s name was submitted. I still know what happened when Amaechi was thrown out of the speaker’s house that he bought during the crazy OBJ induced buyoff of government apartments by the former occupants. I can still recollect how Amaechi was fighting through the courts to claim what he said was rightfully his. One man was always running with him and by him then. Do you know his name? Nyesom Wike!! He was his then man-Friday.

Immediately the Supreme Court gave Amaechi the Victory in 2007, Amaechi made 3 appointments. One of the  first appointments he made was to make Wike his chief of staff.  Wike in that office, took the mantle to task. He was the first point of call before you would see Amaechi.  Ask Tele Ikuru(Amaechi’s deputy then), he would tell you that Wike was the de-facto deputy Governor to Amaechi. The relationship was so strong, because according to some close friends, Wike said he lost so much during the struggle to actualize Amaechi’s mandate. It was his time to “shine”. Did he shine? Of course he did it with gusto.

Sometime in 2009, EFCC came to town and grabbed Wike from Portharcourt. He was accused of having about 5 billion naira in his Trans-Amadi zenith bank account. He was quizzed and taken to court. Amaehi shouted and ranted that they must leave his man alone. Amaechi was able to use the big influence of rivers state government and resources to “scatter” the case for Wike.  The appeal court, in the characteristic Nigerian judicial manner when big men are involved, threw  the case away. The court just came up with some “mumbo-jumbo” technical gist and buried the case.  The EFCC in their characteristic manner refused to appeal the case.  They just allowed the case to fizzle out. No one can actually say what happened to that money as EFCC and the judiciary just mellowed for Wike under Amaechi’s  whining.  That is the system. The going was very good for both of them.

However, in a criminal game such as Nigeria politics(Apologies to Dr Gurubee Nnamdi of Uniport), one or both parties would definitely want more. Wike wanted more than just being the chief of staff. He wanted to be a senator preparatory to being a governor.  Amaechi  demurred to this fact. Ameachi  nor gree!!  He instead helped in wheeling wike to Abuja. Wike saw through this and felt slighted. He had sacrificed a lot for Amaechi to treat him this way. He bided his time and his time came. Amaechi had issues with Jonathan and patience. Wike sensed an opportunity and came in powerfully and was able to squeeze himself into the former first family’s mindset. From then on, it was a battle of 2 former close friends that turned ugly.

What you are witnessing is a “roforofo” fight between 2 former pals  in the mukky Nigeria politics. Both are already looking at each other as eternal enemies after initially being eternal friends 5 years ago. It is the nature of the resources that are involved in politics that has turned people into this.

Wike has set up his own panel accusing Amaechi and others of whacking 57 billion naira. Amaechi earlier set up his own Panel that accused Wike of bombing and killing people during the last election. Nor be wahala be dat? They have turned to brutal enemies.

When una road nor pure na so yawa  dey always gas.. With Amaechi as a minister and Wike as a governor, I can only guess the future “katakata” in that state…

In Amaehi and Wike we have our examples of public frenemies….Ewolewooo!!!