You are here: Home / Chronicles / Amaehi vs Wike: The feud continues…. 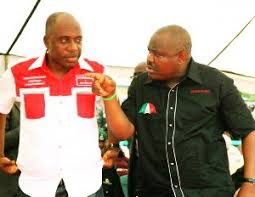 Amaechi  vs  wike: The Feud continues…

Right now in Abuja, the definition of how to select a minister has been reduced to the spending power of Wike vs the determination of Amaechi and the power pushing him on. It is a battle royale. Wike is ready to divide the resources of rivers state into two to fight this battle. He just cannot afford (his bossom friend turned mortal enemy) to become minister.  He (wike) can allow any other person but not Amaechi.

How would he do it? We are still watching. His spending power has already generated double postponement of Amaechi screening process. He has “rushed” the commission of inquiry to finish their work with alacrity. He has quickly come up with white paper on it. He has sent the white paper to Saraki for “proper implementation”.  He is “seriously working” on the senators. When someone says “seriously working” on the senators you should understand what it means. Rivers state governance can take the back seat. “Operation do not confirm Amaechi” is the main thrust of the government of Rivers state as we speak. With saraki not yet sure of his own standing as regards his asset declaration issue, Wike surely has listening ears to rely on.

However, this is the Lacuna. Amaechi, was the director General of Buhari Campaign Organization. He stuck his neck out for Buhari in his sojourn to becoming the President. He was with Buhari when it was like poison to be with him then in that area. He fought with GEJ and he was reduced to “paper Governor” by GEJ.  Infact as Governor, Amaechi was harassed and even curtailed from moving freely in his own state. He, in all intents and purposes, was just rendered “a non-issue” in the state. His support for Buhari  generated  huge ” Federal government induced embarrassment” for him.  How do you now tell buhari to change such a person? I really want to know.

In Amaechi, you have all the forces( For and against) lined up. Wike would have his state senators, the other senators he has “worked on”, People who have scores to settle with Buhari, People who have not forgiven Amaechi for his support for Buhari, someone like Saraki who believes that his case must be settled before everybody is allowed.  However, Amaechi would have Buhari as his supporter, people who believe in Buhari and people who believe that without his support they wouldn’t have gotten to where they are. This is getting more interesting I tell you.

The battle is in a state of flux . One thing is very certain,  Wike is not sleeping very well in Government state house  Portharcourt.  How are we even  sure he is in portharcourt as we speak, he could have temporarily relocated to Abuja.  This matter na serious matter o!!