You are here: Home / Chronicles / Anti corruption Fight: You are on your own 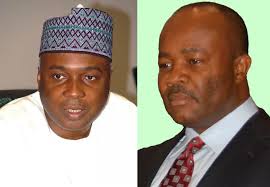 The Appeal court justices “ran away” from giving their judgement on this Saraki issue. I know they have their “plans” but we are still watching. The alacrity with which the justices handled his case only reinforced what many were thinking of as regards their likely judgement. If you now juxtapose it with the confidence displayed by Saraki’s supporters in court today, it could only give you a guess as to where the final judgement would go. In Nigeria, a big man is not supposed to go to court and be embarrassed. The “embarrassment” is only reserved for “we”. Na so we see am o!

This is the only country where a suspect in a case of common theft would have people who would support him on the basis that “he is not the only one”. The logic that he is not the only one qualifies him to be left off the hook in their opinion.  The other day was  Godswill Akpabio was arrested by the EFCC. He had a petition brought against him by someone. The petitioner gave his address and name. He didn’t come as a group or association. It means he could be taken to court for defamation. Akpabio has refused to do that as we speak.

The petitioner gave specific account numbers. He provided specific properties that were bought by Akpabio with specific addresses in Nigeria and abroad. He submitted  dates and time. He was very clear about how, when and what Akpabio did with over a 100 billion naira. He was very detailed. That EFCC is dancing around is not the issue as we are all used to Lamorde’s antics. Lamorde and his EFCC are another case study in deliberate self-imposed delay tactics and obfuscation.

The issue is this: Akpabio has supporters and the supporters are not few. Ask for their defence of Akpabio? They would tell you that Amaechi and Fashola were not dealt with by EFCC despite their petitions so why deal with Akpabio.  Can you imagine that?  You catch a suspect and his defence is that others are not dealt with? This is the standard defence of any Nigerian politician and with the courts by their sides; no big time suspect would be apprehended.  If the sole reason the appeal court is looking into Saraki’s case is because of “political witch-hunt” then  there is real trouble I tell you.

Let anyone who is caught defend himself. Allow anyone on the wrong side of the anti corruption agencies talk for himself. Appeal court should allow Saraki prove his case with everyone. He owes his supporters and his critics alike the opportunity of knowing that his assets were declared properly. PDP should allow Akpabio prove his case. Akpabio himself alluded to this fact in his first EFCC visit. Trying to tell us that others were not invited is not a defence.  It makes no sense at all. Whoever is caught should start talking and singing..

This whole thing is becoming funny…Ewolewoo!!!