You are here: Home / Chronicles / Anti-corruption war: When a “Wayo suspect” starts “fighting against corruption”.. 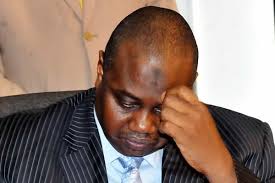 Anti-corruption war: When a “Wayo suspect” starts “fighting against corruption”..

The other day at the senate I saw a lot of interesting things. I saw Godswill Akpabio “staged a walk” out on perceived corruption on the senate floor . Are you kidding me?  I saw a man who spent so much money propagating the fact that he built world class medical centre in Akwa Ibom  but  jettisoned the “world class hospital”for a London hospital when he had an accident.  I saw a man who couldn’t take the people that accused him of corruption to court for libel. He wants to bribe himself out of Lamorde’s  gra-gra.  I saw a man who was the cash centre of money spinning during the last dispensation talking about petition against corruption.  Akpabio should give space o!!

Fayose is talking about corruption too. I tire!! Fayose is accusing Buhari of corruption, I don’t understand. Mr Fayose, what did you declare as your asset in 2003 and what did you declare in 2015? At least we have Buhari’s declaration of asset form that we can hold him to. Where is yours?  Mind you, fayose has a case against him in court before contesting the election that brought him in as governor. This is the character we are saddled with. However, fayose is now crusading against corruption. Free me o!!

Here comes fani-kayode in tow. He is making so much noise on corruption too. Just imagine that?  A man that we all knew the political rigmarole that got him out of the corruption entanglement he was involved in. We all saw how his corruption case was reduced to “boys scout yabis” just because he became the spokesman for GEJ’s campaign.  We all saw how the institution that should have made him pay was manipulated to let him off the hook. He is now regaling us about corruption issue. Fani kayode is talking because he is in his house. He knows where he should have been by now if the institutions were really working.

The problem we have in this corruption issue is simple: the institutions that should take the issue head on are either unwilling or unable to tackle the “high and mighty”.  I am beginning to believe that the people who head those institutions have their different agenda. Or else, how do you explain Lamorde’s  actions  so far? Efcc press releases are always full on convictions of small time crooks. Those are the ones that Lamorde feels comfortable dealing with. He is so scared of the “top tier thieves”, the fear is so baffling.  Above all he seems to be so conscious of his “hidden show” that taunt him to no end . The way Saraki unleashed George Uboh  on him which made him scamper for cover is still fresh in our memory. With Lamorde, thieves would continue to  scream  “Öle”,” Barawo” or Ony’oshi” to others  which is the order of the day now.

We are now at a cross road; the delay in fighting corruption has given fillip to the “power” of alleged thieves in fighting back. The people who now shout about corruption should actually have been in jail by now in saner climes.  This is the reality of the times as we speak. We are watching…Ewolewoo!!