You are here: Home / Chronicles / Bailout: Another chop money….. 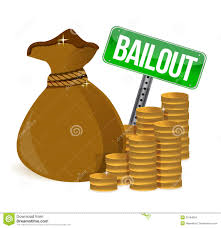 Bailout, bailout and bailout, everyone has a need for bailout. However when state Governors, without shame, starts talking about bailouts as if it’s a right then there is problem.

A situation in which the state governors ,that have been collecting federal allocation, suddenly come cap in hand for federal bailout to pay salaries is trouble I tell you. Whatever happened to the initial allocations that were collected is still a mystery. This is double jeopardy for the citizens of the state as they have missed the initial allocations yet would also have to pay for the loans arising from the bailout. The only gainers both ways are the Governors. Dem nor loss anytin at all.

This is where the bailout issue gets funny. The governors have criminally brought a serious scenario into the system. They have eaten the money and also inching to be the main part of the action for the bailout loans. You can now see why people would die to be governors in Nigeria. You whack money anytime nomatter the misery you embedded in the lives of your state citizens. To make matters more insulting for the citizens, you have immunity from any kind of prosecution. Which other enjoyment pass dat?

Additionally, unless the payment of salaries is handled by the payer, the same way a bank takes over the payment of the subcontractors and workers of the owing contractor, the issue of bailout neva solve o!! The Governors shouldn’t think we are not aware of their desperation to lay their hands on the money and cover the holes already created. No wahala, some of us are watching…

Well, I need Bailout for the moni I don chop too o.. What is good for the goose…… I have decided to keep quiet as usual…Ewolewoooo!!!