You are here: Home / Chronicles / With all these Boko haram attacks, do we still believe Dasuki should go home? 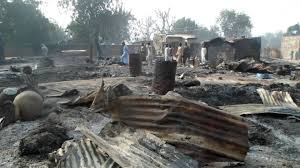 Imagine this scenario: there is an estate in Victoria Island, Lagos  called 1004. It is a residential estate though over a third of the buildings are commercialised now. In this estate, people pay  good money  for security services. Everyone is expected to be secured due to the big sum being paid on security.

Then one day, God forbid!!,  some bad boys just came around killing, robbing and maiming residents without any serious attempts by the security guys to repel these ‘’bad boys”.  After the bloodshed perpetrated by these hoodlums, residents were then told that the money they paid for security has been used by the estate chairman or the M.D of the company managing the Estate to marry more wives, build more houses and buy seaside condos for his children in Dubai and California, USA.

On Saturday, Boko Haram attacked a village(Dalori) in Borno state. They killed, maimed and burned children alive. The refused to take prisoners, infact they came for destruction and it was total destruction. They left sorrows tears and blood on their trail. Many of the refugees in that Village were not spared as this murderous cult was unforgiving in their killing spree.

Now this is the issue: We have a man who was the National security Adviser  that collected money so as to forestall future occurrence of these attacks but he chose to chop and share the money. This man is presently “a hero” in Nigeria. He has people who are fighting for him to be released on bail. He has Judges, who would go home to the warm embrace of their wives and kids, shouting that he should be released.  This man has newspapers screaming that he should go home in peace.  The man called Dasuki, is now so convinced of his ‘’powers’’ now that he believes that all his problems would soon be solved because he knows the judiciary so well.

We lost a country when we believe that the money for security can be used for elections and we would easily condone it. We lost a nation when we believe that the money that should help the soldiers to battle boko haram can be used to settle individuals to wet their appetite for filthy lucre. We are no more having a country when we have people ready to support individuals whose actions directly or indirectly caused the kind of  attacks perpetrated by boko haram.

In a sane society, when the issue of security is involved, all bets are off.  In these societies, any attempt or “attempted attempt”  to link anyone nomatter how mighty to the mismanagement of security funds is taken like treason. It is far more serious if the mismanagement of the security funds caused the deaths of soldiers and civilians. However, we are taking it as normal political chess game here.