You are here: Home / Chronicles / Charles Okah: An example of how not to “effectively” prosecute crimes 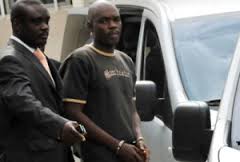 Charles Okah, the brother of Jailed Henry Okah, attempted to commit suicide this morning. He wanted to jump out of the window of a third storey building as he was speaking in court. He felt he had been hard – done just because he is the brother of Henry Okah the mastermind of the October ‘10 independence day bombing. He just wanted to end it all because as far as he was concerned it is “an unending trial”. It is also an endless torture of extreme proportion to his whole being.

Sorry Charles, I am really sorry about your plight. There’s no particular trial or evidence yet linking you to the bombing but so far it is on terrorism charges you are on your own. However, there are exceptions to the fight against terrorism or any other vices in Nigeria.I would list some of them them for you Charles. It is very unfortunate but it’s true.

You should have prayed to the deity that you believe in to be a senator. If you were a senator, things might have worked differently for you. You have another terrorism suspect in the national assembly who incidentally is the Senate majority leader. His name is Ali Ndume. He is presently on trial for terrorism charges, specifically as a boko haram supporter. He even accepted having some of their numbers in his phone. However, unlike you, he is going to be sleeping with his wives anytime he likes. You can see the power of “levels”. Nor be small tin o!!

Again you should have done fasting and prayers decades ago to be a former Governor. Remember, the former Governor of Bornu state, Ali modu Sherrif. He is a serious suspect in this Boko haram issue too. However, despite being a suspect, he doesn’t need to think about suicidal intentions like you. He was quizzed and let off the hook on bail. That is why it is good to be a “very important personality” in Nigeria. He is still as free as a butterfly. He is in his abode as we speak. Sorry o!!

Another fatal mistake that you’ve made is that you are not a billionaire. In Nigeria, billionaires are permitted to commit crimes and naatin would happen. If you were a billionaire, it would have been a different matter altogether. I can tell you that this case would have taken a new colouration if you were one. It would have been seen in different light I tell you. A lot of issues would have been generated to cause maximum distraction. You, most probably, would have been having a business meeting or having rendezvous with your wife or mistress(as the case may be) right now. Sorry o!!!

For now Charles , you have to follow the due process oo!! Na ya lvel be dat!! I am quite sorry. It’s to your tent bro…..Ewolewoo!!