You are here: Home / Sport Mattas / To Chelsea Players: Bring out your potentials 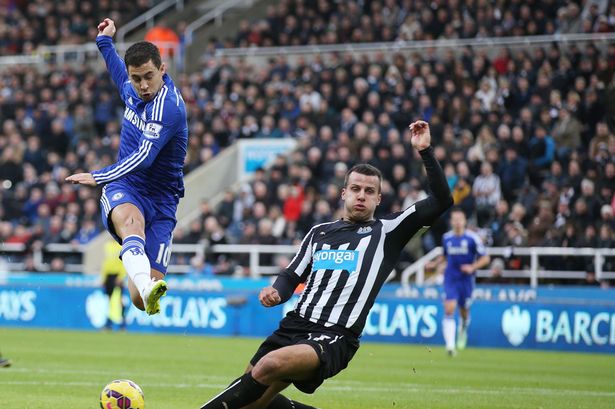 Chelsea, Chelsea, my Chelsea, this is not looking good at all. We defeated Arsenal last weekednd and we just couldn’t build on it this weekend. Why? I say why? This is hurting me I tell you. Just imagine Newcastle FC giving us troubles. Remy was playing like a 67 years old veteran. Ivanovic has lost his spark. Pedro is becoming more of an inconsistent quantity. Hazard is lost in the crowd. Fabrigas is playing as if his wife has just given him debilitating divorce papers. I still don’t get it. This season is turning out to be a very “wicked season”. Chai!!

I have noticed the calmness this weekend. Chelsea didn’t win; “everyone” seems happy. Arsenal won; “everyone” is cool. Manchester united won; “everyone” is just fine. Last week was just crazy because Chelsea won. Everything was done to kill the “joy” of Chelsea’s victory. The FA reversed a red card that, even Wenger, admitted was justified. The referee denied he never saw what he saw under pressure.Eva caneiro’s case was exhumed out of the blues again. I don’t understand how it has become the FA’s business in an internal labor issue. FA is bothered that a coach has altercation with his medical team and it has become an FA wahala. How’s that done? Mourinho had issues with his medical team and it was suddenly turned to caneiro’s issue just to bring up sexism war. I tire o!!

The person I blame for the happenings on the pitch would still be mourinho. He showed and displayed too much loyalty for players which has now come back to haunt him. He allowed others to move in on some players when he could easily have gotten them. He gave some players the believe that they could not be replaced and we are seeing the result. This has contributed in the lackadaisical approach I have seen in some players with such “loyalty”. We should just thank our stars that we didn’t lose yesterday. It could have been far worse.

Wait a minute: Manchester city lost 4-1 to Tottenham and everywhere is this calm? Are my missing something? This is serious!! Mancity lost scandalously to a team they used to beat both home and “abroad” with this margin and all hell hasn’t broken lose? Just imagine Chelsea losing with this scoreline and you would see cartoons and mimics all around the media. Pundits would have analysed in an unending fashion how this has been a result foretold. Now it is good to be a Mancity Manager. You know some clubs have that tolerance too. You can “pass”, you can “fail”. No problem… I didn’t mention any name here o!!

For now, Chelsea players need to stand up and play to their potentials. It doesn’t do them any good to continue in this fashion. Chelsea is not a team made for crumbs. Chelsea is a team used to winning. It is a team with set goals to achieve not just to be a member of the elite but at the peak of the elite. Other clubs are happy being part of the controllers’ club of teams. However, Chelsea’s goal is to be in charge of the controllers’s club. The players need to wake up. Thank God we didn’t lose at least…Ewolewoo!!