You are here: Home / Chronicles / Corruption: We don’t like you but we want you 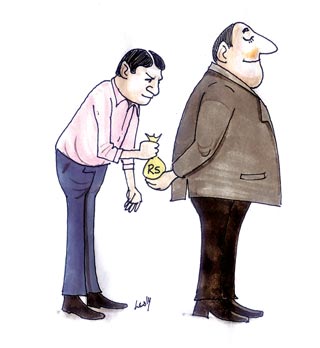 A lot of Nigerians don’t like corruption but unfortunately the degree of hatred varies. You would be surprised at how a lot would condone a public official being a millionaire or billionaire. This is not surprising in the least because the generation of Nigerians of today grew up, and are still growing up, with the mindset that being a public official is the pathway to millions.

Let’s start from 1999. If you are a 34 year old Nigerian today(2015), it means that that you were 18 years old at that point. You would either just have finished your secondary school then or a fresher in the university . You would initially have noticed, before the civilians took over, some people who were very close to the military guys enjoying all the tills of being in public office. After the civilians took over, you would have seen a blowout in opulence of the civilian class as obtained in the executive and legislative guys.

You would have noticed within 16years, how some peoples’ lives changed forever on account of being part of government. Guys who were your next door neighbors became regular fliers(many times in first class) to Europe and USA just because their parents (or guardians) became senators, commissioners, house of rep members, ministers or permanent secretaries. You see all these transformations and not one of these guys was convicted of stealing anything. The impression that would be created in your mind is simple: Join government and pick the money, notin dey happen!!

That is the reason a governor would claim he is fighting corruption but no one knows his declared account balance because he wouldn’t dare let us into the details. He knows that a lot of Nigerians are ready to accept the fact that “he should be a billionaire”. They don’t mind that his being a “billionaire” is on their account o!!

That is the reason a lot of young Nigerians are no longer interested in growing “family business(es)”. Why should they waste their time and energy thinking about how to grow a “kobo-kobo” family business concern? They know they can join politics and make the millions within months. Why should I sweat my ass out in my father’s business when I could join the judiciary and get “things done”. Why should I bother about wahala when being close to government is the way to go. The money is cool and no consequences whatsoever. If it is EFCC wahala, forget am. They would do their normal gra-gra and fizzle out.

It is in this context that we should all hail and encourage the idea of declaring assets publicly once you are in public office. If you don’t want to do so, go into private business. That is the reason I will continue to hail the declaration of asset by the President. Any public officer who wants to blame the President for anything must first declare his asset publicly(Fayose take note!!). Declare your assets and then face the President on issues you don’t agree with. You cannot be hiding inside your cocoon of heists.  People  cannot continue to hide under one mundane law to steal. We need to let people understand that you don’t get rich in public office, you make money in private business. It is private business that creates jobs and if people are largely discouraged in it, where would the jobs come from? The more we produce billionaires in public office the more we kill entrepreneurship spirits of Nigerians.