You are here: Home / Other News / Court jails a 1.5 billion naira thief for 5 years? are you kidding me? 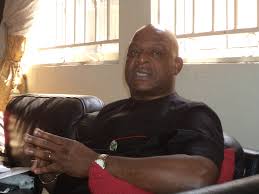 A court just convicted the ex-NIMASA(Nigerian Maritime Administration Safety Agency) boss, Mr Raymond Omatseye, for 5years. What was the offence? He was jailed for practically “swallowing”(forget the big grammar ) 1.5 billion naira, about US$28 million, when he was the boss of that agency.  He chopped 1.5 billion naira and he has only 5 years to spend in the cooler. What this means is that this man would be out in 3 years.  Tell me who wouldn’t want to steal? Who is a fool?

When you have a system where billionaire thieves, if ever convicted, are sentenced to ridiculous number of years in prison, we’ve got issues. The funny thing is this: Nigerians have refused to see the correlation between this kind of financial rape of their resources and their present economic malady. If a man can be sentenced to a 5 year jail term by stealing 1.5 billion naira, which translates to 300 million naira per year, I don’t know a better business than that.

Mind you, this is just a tip of the iceberg. If you catch a Nigerian billionaire thief for stealing 1.5 billion naira, be very sure that there must be another 8 billion naira that he has hidden from you. What I mean is this, anyone caught has substantially more in his hidden trove that has not been, or may never be, uncovered. Yet the system is supposed to absolve the consequences and live well after. This is just pure fantasy.  We are supposed to underwrite this as “bad debt” and carry the troubles? I don’t get this.

Someone has to tell the Judges that a leniency that allows anyone who stole to go jail and still keep the money is a danger to the corporate entity of this country. Anyone who stole cannot keep the money. That can never work. Omatseye must be told to return 1.5 billion naira in addition to going to jail.  If he doesn’t do that, he should learn how to make kirikiri his permanent residence.

Its high time Nigerians direct their agitation to anyone caught as a thief and any Judge that gave him/her lenient sentence. No matter how we spin it, we (who never benefitted) would be made to pay. We can’t run away from it. Until we treat thieves as thieves and get back the stolen goods from them, we might find things more difficult than thought.

Omatseye must return the 1.5 billion naira. Anything short of that is just a waste of time….Ewolewoo!!