You are here: Home / Chronicles / David Cameron; The ”Poor” PM of Britain… 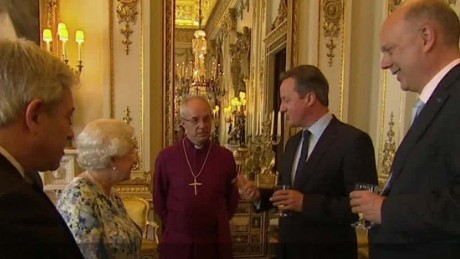 In a meeting with the queen,the British Prime Minister, David Cameron, said that Nigeria is “Fantastically corrupt”. To make it even more insulting, he grouped us with Afghanistan. Kai!! Chineke!! What an assault to our intelligence.

Why should he say so? Someone should warn that man to mind his own business or we mind it for him. What nonsense? What gibberish? What kind of punishable innuendo is this? This man needs to be careful. When I say ‘’be careful”, I mean it o!! He could be “kidnapped’ in downing street with a ransom fee that the whole UK would ‘’cry’’ to pay.  He is not immune to that so he should watch out. He is playing with fire oo!! Just imagine!!

Is it our fault that our Bank MDs are now bullion vans for the politicians? How did it become our problem that Deziani gave an MD of a bank UK115 million pounds to share? When did it become our ‘’wahala’’ that another MD collected 88 million pounds from the same Deziani? Meanwhile Deziani is living in the UK mind you. This man should take his time o!! He is just jealous because he is a ‘’ very poor man”.  Yes na!! Does he have that kind of money just to share? Does he? Poor man!!

People should be more careful of poverty stricken head of states o!! Let me tell Cameron something he doesn’t understand. He needs to know that we are a nation full of billionaires, potential billionaires and aspiring billionaires. We are not in that his conservative entailed grammar speaking enclave of his. Here, we live with money. We dream of money. We breathe money. We are not used to poor people with their frustrations.

We are sick and tired of Leaders who cannot boast of any tangible money disturbing our ears. We are so “blessed’’ that we can understand how envious many people are against us. Cameron is jealous because we’ve got a former Chief of Defence staff that has so much money, then had to buy his son 240 million naira house. David Cameron is gnashing his teeth that common Femi Fani Kayode got 840 million naira(about UK1.8 million pounds) deposited in his account just for being a campaign spokesman.  Did Cameron’s spokesperson get a tenth of that during his last campaign? Poor man!! Tufiakwa!!

When people are angry because they don’t have money we should understand where there frustrations lie. David Cameron is a ‘’very poor man” and he has infected people working with him with “poverty mentality”.  There’s money to be spent here in Nigeria. It is not our problem that David Cameron is not so lucky.  Take ya time Cameron….Or else…Ewolewoo!!