You are here: Home / Other News / Doyin Okupe: Yes I collected money but… 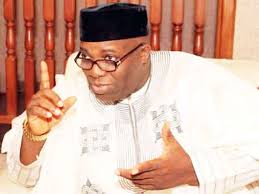 Wonders shall never end in Nigeria I must confess. Doyin okupe is providing wonders as we speak. He is speaking in “tongues” right now. Recently the EFCC announced that some amounts of money Dasuki shared were traced to Okupe.  Okupe, in his defence, never denied the fact that he collected money from Dasuki. Instead, he said that his office has always been financed by the NSA’s office. Tell me, what’s the relationship between National Security adviser’s office and Doyin okupe’s former office as the Presidential adviser?

If you could recall that this same Doyin Okupe was sacked by Former President Olusegun Obasanjo because he was not too honest with Financial matters. As at today, okupe has unfinished contractual obligations to Benue and Imo states that he has failed to redeem. He collected money for the contracts and bailed..

He was in the cooler when President Jonathan decided to pluck him out. Jonathan brought him out for “specific duties” and he failed to deliver. He became so ineffective to Jonathan, like Reuben Abati, that Jonathan had no choice than to bring in Femi Fani-kayode into his corner. Femi fani kayode ”delivered in some ways” and he was ‘dutifully rewarded’. Do you think it is easy for a single individual to receive over 800 million naira into his accounts just like that?  Fani-kayode enjoyed such ‘privilege’ which Okupe never sniffed.  Yes na!!

After Okupe heard of what Femi fani-kayode enjoyed, he turned 180 degrees. He is now blaming his benefactor(Jonathan). I know Okupe is more incensed that someone like Olisa metuh got 400 million naira just like that while he got so little comparatively.  If you scan okupe’s mind , I can assure you that okupe is angry that Raymond Dokpesi(AIT Chairman) got 2.1 billion naira from Dasuki while he(okupe) who worked inside Aso Rock as Presidential adviser didn’t get anything close to that. Doyin okupe is not happy with Jonathan at all I can assure you. Sorry doyin Okupe..

However,  Doyin Okupe should understand that his renewed stories don’t make any sense at all. Anyone who collected money not appropriated for security from Dasuki cannot be deemed as honourable. Dasuki  was the security adviser to the Government and not the “Financial and administrative adviser” to the Government. The way things are; If any money is traced to him, he has to pay.  He’s got no choice….Ewolewoo!!