You are here: Home / Chronicles / DSP Alamieyeseigha: The man who ran and ran out…Adieu!! 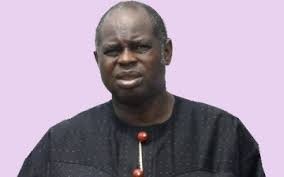 DSP Alamieyeseigha is dead. He died on Saturday after succumbing to what the family said was hypertension. The high blood pressure went into over-drive when the British people started insinuating that they might still want to get him.

Alams who had been enjoying a good life after the infamous pardon suddenly heard that the trouble never finish. Nor be small tin o!! The man just “collapsed”. He just expired straight on. I don’t blame him. Rest in Peace my Governor General.

There is one Prosecutor of the Metropolitan police called Shasha Wass. With Prosecutors like that lady and others populating the notorious UK crime agency Ombudsman, it would not be a tea party being in the same court room with this kind of individuals. Our Politicians and government officials who are  used to our police, EFCC and our kobo-kobo judiciary would not find it funny meeting these kind of people  on this corruption story I tell you. Meeting those people means “touching fire with their bare hands”.

DSP Alams knew what everyone knows. Going to UK na  wahala.  Buhari would not help him. His benefactor (Jonathan) is no more in power. Ibori (his jailed friend) would have told him that he should do all he could to avoid the “wicked UK people”. Ibori saw how he was decimated over there. Ibori knew how he manipulated our Judiciary up to the Supreme court level (remember the deference between James Onanefe Ibori and James Onanefe Ibori!!). However he(Ibori) saw how the game changed when he met an actual prosecutor and a real judiciary. He don tell Alams  say  “ägu no na’kirika” (which  literally means there is fire on the mountain ).

As Alams heard that the UK were still interested in him, he had to practically take off from Dubai. He ran back to PH where he unfortunately passed on.  See how scared our “big men” could be whenever they see situations where they could be held to account on how they made their money. They run helter skelter to see how this is scattered. However when this is not done, it is really wahala. On Alams we have an example.

To Alams family, I say a big sorry for the loss. However, my grouse with Alams is simple: Why didn’t you build that Chelsea Hotel in yenogoa instead of Abuja? At least some people would be employed in the hotel. Additionally, you should have been treated in Yenogoa since you were a governor of that oil rich state for 5 years instead of always travelling abroad for medical treatment. This would at least show that as the “Governor General of Ijaw Nation” your people would really feel you superbly. Remember its one of these travels that caused all the  kataka.. All the same I would say Rest in Peace again…