You are here: Home / Chronicles / DSS and missing 300 million: Is DSS a bank with vault? 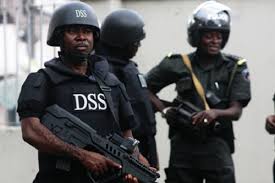 The DSS just announced that some members of the organization were involved in the robbery of a bureau de-change. The amount involved was just over 300 million naira. The DSS said some of the guys have been arrested and undergoing interrogation. That is cool I must say.

However, you know that in today Nigeria, nothing is hidden too long. You can’t just blow some grammar and believe that you have spoken and everyone has heard you.  Yet you think you are believed in the same vein. The snippets of the information must come out.

What we are gathering now is that there is more than meets the eye in this “robbery incident”. We have received information that the “robbery incident” could be a “major double-cross”.  It is now floating, though unconfirmed yet,  that the “double-cross” involved the person of the senate President Bukola Saraki. The rumours is that he was using his fronts to transfer money from the bureau de-change to his house when some members of DSS struck.

The DSS boys, as the reports went, “arrested” the bullion van that was transporting the money to saraki’s house and demanded for their share of the loot. They eventually settled for 300 million naira with the Saraki front man as gathered from the rumour. Do you know what? If given a choice to choose the truth between the rumours and DSS version of the story, I will go for the rumour.

From my knowledge of the Present Senate President, anything is possible. The way he has run rings around our Judiciary is beyond believe. The manner he employed in “dealing with and muscling” EFCC and lamorde has been a style straight from the Mafioso playbook.  The method he has used to scare CBN away from his prying eyes should be a dedicated course in advanced degree on criminology. I have passed a stage where anything he says to prove his so-called innocence rings hollow in my ears. With Saraki, nothing is impossible.

Can you can see what is happening? If some DSS boys could just “extort” or “rob” (depending on which one you believe) 300 million naira from a closet, how much was in that closet?  You don’t need a soothsayer to believe that we’ve got billions in the closet before these boys could get that amount.  This explains why it is so difficult to deal with the so-called big boys. This goes to show the reason it is so tight using our judiciary to deal with these rich guys, they would just bribe them off. It is so unfortunate.

Well we are going somewhere. The DSS should come clean on this matter. Nigerians are more than smart to see red when you are trying to force them to imagine white. The DSS should explain how it was very easy to steal 300 million naira physical cash outside a bank? Where was the money heading to before it was robbed? It is not easy to enter a bureau de-change and rob that kind of money without consequences on the ground. No bank was robbed, no bank’s bullion van was raided to our knowlegde. I also do know that DSS doesn’t have a safe house where billions are lodged. So where did this 300 million come from?

If DSS decides to keep quiet, we will decide to use our own “inner sense” and come to the glaring “conclusion”. For now the conclusion is not too friendly to both the DSS and Saraki.

We are still keeping mute as usual as we watch the contrived drama plays itself out….Ewolewoo!!