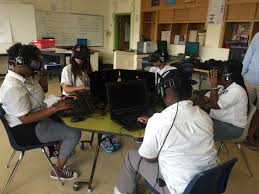 I remember when I was young and about to enter primary school, we went to what yorubas called ”Je’le osimi” it means “ let there be peace at home”. Then, we used what we called “slates”, you may call it chalk board, a mobile one, that we were using our chalks on. That was then. However it has changed now. Things have changed so dramatically that we are struggling to hold on to the traditional ways of doing things.

The education that we knew and grew up with in our own setting is being overtaken by what is happening on the streets I tell you. I can understand the mindset of our ways, but unfortunately, things are changing. I grew up using a 4 figure table in secondary school for maths. I grew up using a chalk board as the only measure of teacher to student impact relationship in classroom. I grew up to understand that going to school must only be in a 4 wall of the institution and anything outside of it would never work. I grew up to believe that formulars must be developed from 1st principles before using them as that would give you a thorough understanding of the subject matter. I grew up to know the riduments of letter writing and having a very good handwriting. I can go on and on… However, the truth is this, the streets, that we are in, do not have the patience for such rudiments. We are in a jet age I tell you.

We are in a new world were the kids can play games on the computers better than they can pick their books. We are in a new world where the new smart phones we are using can do the combined work of post office, PC, telex, radio,banking and files transfer all in seconds. We are in a world where it is far easier for me to buy things in my house without knowing the art of talking to people to please them as I only need my phone. We are in a world where all those things you learnt in so many years could be compressed in one app, end of story. We are in a world of pilotless planes (hope you have heard of drones). Very soon many cars would have no need for drivers I tell you. As I speak to you Apple, Samsung and other smart phones manufacturers are coming out with new phones based on the current needs of the streets we all pass through. I can go on…

WAEC said students are failing. It’s sad, however WAEC needs to force schools to update into some of what the students are most likely to use or observed being used at home, or on their way home to get their the desired interest. If we continue to insist on the traditional or conventional ways in our educational system without updating it, then we are ultimately alienating a section of the people who do not believe that the educational system wholly represents the total part to their progress.

Let’s incorporate the streets realities progress into our system…..Ewolewooo!!!#ewolewoo#

N.B: Streets in this post encapsulates our modern day (daily)realities