You are here: Home / Other News / Emir Lamido Sanusi, please where should Buhari manufacture money from? 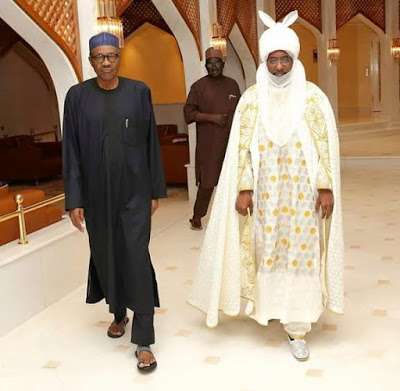 The Emir of Kano, Lamido Sanusi, warned President Buhari that he might soon be in the same league with former President Jonathan in the eyes of the Public. In his analysis, the economic system being practised would only perpetuate poverty. He mentioned something again; He said any system that allows people to just, with a call in their homes,  become billionaires  is unsustainable, I agree with this point totally.

There is a problem, which is major, that he touched but in a glancing mode. He acknowledged that Nigeria depends on oil. However, he said that the oil era is gone and a new thinking should come into place. This is where I have my reservations. When I hear people say that oil era is gone, it baffles me to no end. How can oil era be gone when the structures created and sustained by the “öil era” are still intact?  These structures are supposed to be serviced and maintained. I now ask this simple question; which money would maintain them?  I am not aware that Nigeria has any other commodity or service with serious massive inflow of forex than oil.  Jigawa state was created out of kano state because of oil. Without the crude oil mindset Jigawa state would not have come into existence. How do you now service a state like Jigawa without crude oil money?

The way and manner people talk about crude oil these days is baffling. We have refused to understand that crude oil, for now, is the soul of this nation. We can deny it the way we want. We can spin it out of existence the way we desire. However, crude oil defines the system. In the 80s, Kano was an industrial hub of the northern region.  However, all the major industries are dead because the state and federal governments over the years were more focused on the crude oil allocations, so they never cared. How do you solve that immediately without it?

Nigeria needs an urgent and massive inflow of money to service the already bloated system created by our reliance crude oil. It is either the crude rises substantially to take care of our high recurrent bills or the bloated system is substantially reduced to accommodate our reduced inflow. In the alternative ; we can still get-by if there are other minerals that would immediately inject funds into the system  or we borrow with very tough conditionalities.  I don’t know which economic expert(s) would work without money.

I have seen people attacked Buhari in all manners they could but no one has mentioned how the money to service a gargantuan system like Nigeria would come from. The point is simple; where would the money come from? I have been predicting that we would get to this stage in most write-ups on crude oil and economy. I knew it because it’s simple economics.

I want people to tell me how Osun,Niger,Ekiti,Jigawa, Yobe, Imo,  Ebonyi, Abia, Kogi states among others can be serviced without high crude oil  price? How? Where would the money to pay the over bloated civil service structures come from? When a state like  Niger state has 40k workers to pay, what do you expect? You expect economists to sit down in a roundtable and offer suggestions without money to back them up? The civil servants in these states need their salaries and they need the money now not tomorrow.

With the way the CBN  suspended banks on Forex, it should be further clear to everyone that the reliance on crude oil is far more deep and intricate than being admitted. The banks ran afoul of CBN guidelines because they couldn’t let-go NNPC money. It is simple. The Banks are so cobbled with NNPC that they just didn’t know how to do without the NNPC money. It became release the money you’re damned, don’t release you’re damned. Nigeria is entangled with this crude oil and that is the problem.

That some well-connected people are making money in a confused economy like ours should be expected. In a dilapidated state of ours, some people are at an advantage to exploit the loopholes. I am not surprised at that. However, the main issue that everyone feels should be by-passed and it’s not that simple. To pretend that it is that easy is to deny reality. Jonathan struggled with oil price at $115/barrel without militants’ attacks. He even increased pump price of petrol in 2012. How you now expect Buhari to perform miracle at $45/barrel is still a mystery to me.

Buhari has a problem, it is called “money”…

Without crude oil price rising, Buhari has no other instant choice…

$75/barrel or the economy will go totally bust!!