You are here: Home / Chronicles / Emmanuel Okoyomon: Another sad case for our judicial system 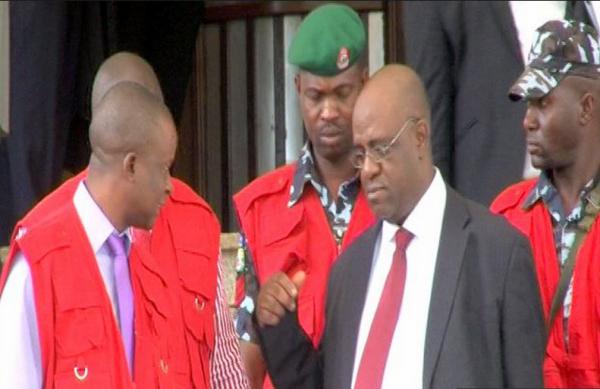 There is one man who is busy running from pillar to post. You know why? He doesn’t  want to go to the UK to be tried for bribery and  money laundering. He is trying to dodge behind a finger..Na lie e nor go work!!The name of the man is Emmanuel Okoyomon. He was the former managing Director of Nigerian security Printing and Minting Company. This is the official printers of our money for the CBN.

There was a very serious allegation of some contract awarded some years back(specifically in 2009). The contract involved printing of money. In doing so, Okoyomon, with others,  was alleged to have been involved in the art of squeezing the cakes into his mouth. Of course  he knew it would be very difficult for him to be found out and dealt with here in nigeria. So he didn’t care of the repercussions that could befall him in such a very “shady deal”. The critical mistake he made was that; the shenanigan crossed into the UK’s path. Suddenly, he could  now feel the  complications that could arise  in facing with a real judicial system. Haaa!!! “How that one go happen?” He would have exclaimed.!!

A man who was just a brewing manager of Guiness Nigeria limited in the 90s. Suddenly got into a Government agency in the 2000’s and became a billionaire. Wetin com happen? This has been the problem with the system, People believe it’s easier to clear the path to being  billionaires once they can get into the Government. Buhari has his work cut out ooo!!! I nor envy am at all!!

Okoyomon knows that  it is better to face our judicial system than allowing the British to handle, “fully”, the whole  action.  He knows what he can achieve with our system. He has the money and he believes his money could set him free.

He understands that it would be difficult to shout “persecution ooo!! against the British. He knows he doesn’t have any lawyer that can act as the link-man with any of the UK judges. He is aware that in UK his trial would be concluded within 9 weeks. He knows that if the trial were to hold in Nigeria it could take years then forgotten all together. He is very much aware of the difference between  the way our judiciary treated Ibori with how the British judiciary handled him. The man get sense well well. He wants to be tried here. Wu sai!!!

It is a case like this that highlights what has been the unfortunate scenario we have been facing with our judiciary. A judiciary that would jail without mercy the common “Joe the thief”  but would cuddle, in endless manner, the “big-man-billionaire-thief”. A judiciary that listens to what the supporters of big men thieves say on the pages of newspapers. However the same judiciary is unforgiving when a phone thief is caught. Okoyomon knows this and he wants to exploit it. I wouldn’t blame him. “Others are enjoying the show, why not me?” He would say to himself.

I thought he likes going to the UK on holidays with his family, he nor no say the tin wey dey sweet fit kill too. He should go there and expose the CBN guys that facilitated the “wayo” too. If it were here, people would have used all sorts of confusing grammar to complicate things. In the UK we would hear the whole story. If in doubt he should get to Ibori for clarrifications…