You are here: Home / Chronicles / Fayose: The “senior Prefect” 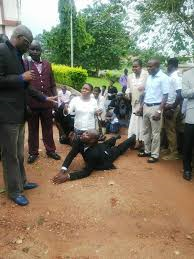 The Governor of Ekiti state went to the secretariat and pinned down the late comers. He was there before 8 am while many civil servants were still in their houses. That must be the time they were just waking up from their “sweet” sleep I believe. You know that people can actually snore away when sleeping. Mind you, Snoring has variations combined with different sound levels. A lot must have chosen or inculcated the deepest of the snores. The louder the snores,  the deeper the sleep. So  Oga Governor nor mind dem.

However, this says a lot about our attitudes to our employees. This again indicates something about how we administer punishment to people we believe we are signing their pay checks. There is no way you can totally stop truancy at work. It can’t happen!! People would always come late from time to time, sometimes in very annoying manner. It is wrong but it is a fact of life. However, denigrating them or making them look very stupid in public glare cannot be a way to help the system. Infact it highlights the failings of the system I tell you.

Wetin go make governor dey chase civil servants about if im get work to do? This is 21st century remember! !! We are in an age where detecting latecomers is not rocket science. There are so many technologies out there where late comers could be fished out and dealt with appropriately. We even have the traditional “clock system” where everyone clocks and he/she is paid on pro-rata basis.  If you come in by 10 am, instead of 8 a.m, then the clock registers it and you found your wages for that day reduced by 2 hours. I know for a fact that when a Nigerian knows that there is a personal cost on his income whenever he comes late to work he/she would adjust immediately. Naija nor dey joke with moni at all. What the governor did could be acceptable in the 1970s but right now it just gave an impression of a “jobless Governor”.

I can only suspect the reason of using physical detection of late comers. Funny, enough he just reminded me of our days in secondary school. Na we dey catch late comers..lol!!  Like I was saying before I rudely interrupted my self, The Governor, I suspect, might not be interested in using the technologies out there (or the normal clocking system) to catch latecomers because he doesn’t want everyone to know the total number of the civil servants. Knowing the total number would reduce the” inflated” figures these governors put out as the total number of staff. It would be clear at every point  how many staff we’ve got at each ministry and government agency .Because some state’s staff strength is far more than the largest factory you could think of.  . I know say e nor go encourage that… Make e leave mata o!!

For now, Governor Fayose should understand that there are some people who are looking beyond the photo shoots o!! We are not fascinated by this attempt to play “senior prefect”  to adults who could even be much older and more educated than him o!!  If he wan stop late coming, there are better and more efficient ways of doing so. This wayo harassment nor be am o!!