You are here: Home / Chronicles / Fayose, What qualified you to collect 1.2 billion naira from Dasuki? We want to know.. 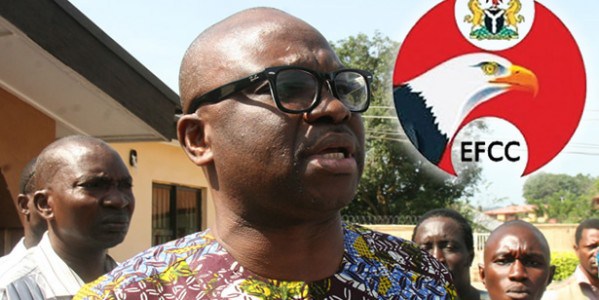 The EFCC just froze Governor Ayo Fayose’s accounts on allegation of money laundering. He has been accused of collecting 1.2 billion naira from Dasuki in 2014 to fund his election.  As we speak, 500 million naira was traced to his Zenith bank account before it was frozen.  This is Fayose the “champion of the masses”. Mind you, his workers in Ekiti state have not been paid for the past  6 months. They have their entire 2015 leave bonuses unpaid as we speak. The school teachers have  different stories to tell. Yet Fayose is a very rich man.  I ask rich man with whose money?  Your guess is as good as mine..

Something interesting has been going on since this story broke. I have not heard Fayose defend himself on the specific allegations against him. He hasn’t bothered, by any stretch of imagination, to offer specific details on EFCC’s alleged infractions over him.  The only defence he’s offering now is this: I am not the only thief.  He is dropping different names in other allegations of corruption. In his warped mind, if others are not held accountable, why should Fayose?  If other thieves escaped or not caught, Fayose’s thievery should not be a matter for discussion.  Fayose is not telling anyone what he did for the Government that gave him the right to collect 1.2 billion naira from Dasuki.  Fayose is telling us that it is supposed to be a “normal stuff” by all parties.

One thing I have found out in Nigeria is this, once you have your hands in the cookey jar, just become a Buhari ardent critic and your alibi is guaranteed. Once you are arrested for corruption, you only need to claim that it must be due to your opposition to Government and everything is political persecution.

We all read the first statement that came from Dasuki(with his supporters) when he was picked up.  Dasuki implied the same thing until hard-facts were shown to him. We can still re-collect what Raymond Dokpesi of AIT said once the EFCC knocked on his door. He claimed political persecution initially, but when cold facts were shown to him on how he collected 2.1 billion naira, he went cold. Infact Dokpesi couldn’t understand his own language anymore. He started giving conflicting statements like a cornered thief.  Olisa Metuh is dancing naked now to breathe. He came out with the same logic until he found out that pictures of his whole fingers in the soup were available. Fayose should understand that this is a serious issue and he wouldn’t be left alone because he’s dropping names. He should speak for himself.

Fayose should understand that he has been busted. Dey don catch am!! He who comes for equity must come with clean hands.  A cheating husband cannot in good conscience claim the moral high ground when complaining about an uncaring wife. Fayose should know that he has a case that he must answer. There’s an on-going  investigation  and he only has to answer for himself.

When you are caught as a thief, you are a thief. Pointing or shouting other alleged thieves’ names in other issues would never be a reason to get you off the hook. Your freedom can only be obtained if you can prove that you didn’t steal.  I expect Fayose to do so.

For now, the ball is on Fayose to prove that the money in his account was actually his personal money that he got through legitimate business. I pray he would do that..We are listening…Ewolewoo!!

Fayose, Pay your your workers. Talk is very cheap..