You are here: Home / Other News / For Saraki and Ekwerenmadu: Why should Nigerians continue to to pay your bills? 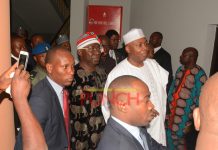 Saraki and Ekwerenmadu are charged for forgery but  the court case has been adjourned to September 28 because of Judges vacation. Does it make any sense? Nigerians would continue to foot the palatial living bills of politicians charged for forgery, does this make any iota of sense? Which institution or private entity would still be paying the salaries of employees that are in court for forgery? I don’t get it. Saraki and Ekwerenmadu would still be in the chamber, making laws while being charged with forgery?

This is the only country that I can think of where people who are in court for corruption are still being fed by the Public. This is the only country where the courts  have acted as sanctuaries for billionaire political thieves. Once a politician knows how to share his looted billions, then, his court case would suffer endless adjournments until it is forgotten.

Just imagine for a second if Hillary Clinton had been indicted. Do you think she would have continued her campaign? However, if it were in Nigeria, indictments make no sense. She would have continued her campaign if it were here. Examples are bound : Fayose was undergoing corruption trial when he was allowed to contest and he won. We are all witnesses to his rabble rousing attitude after he was caught with all his body in the cookey jar. No shame, nothing.  Theodore Orji was in jail for corruption when he was brought to rule Abia state. He ruled Abia state for 8 years and the result is there for anyone to see. A career thief is always a thief no matter the kind of clothes he changed into.

The institution of court has been debased in Nigeria once public office is concerned. This is quite sad. I know something for sure; you cannot retain your job in the bank if you are charged with corruption or forgery. It doesn’t matter the extent or otherwise of your guilt. No bank would retain your services once you are in the dock. If you are looking for Job in any company and you mention the fact that you have a pending case in court based on forgery or corruption, that is the end of the employment process. You are done!!  Would Saraki employ someone that is charged for corruption in any of  his ‘various companies’? If he can’t, how come he feels Nigerians must continue to pay for his services with all the baggage he’s carrying? This is the height of wickedness and meanness. This situation is not helping the polity and it would never work in our favour.

The system would have to get reformed if we must move forward. Nigeria and Nigerians cannot continue to pay for the abstentious lifestyles of Saraki and Ekwerenmadu while they’re being charged for forgery and corruption.  If no one wants a man charged in court near his business, then I do not see why the system should pay the bills of such character.  We cannot be sitting and standing at the same time.

It is time we tell Saraki and Ekwerenmadu to save us the shame….Ewolewoo!!