You are here: Home / Other News / For the Chief of Army staff: You have no choice than to show you that are clean. No choice sir!! 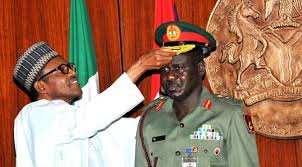 The Chief of Army staff, General Tukur Buratai was recently accused of stealing. The report from Sahara reporters said that the man dipped his hand in the cookey jar when he was the Director of Procurement at the Army HQ( Buratai refuted this by claiming that he was  Director of procurement at the defence HQ, I don’t know the difference though). He was further accused of buying luxurious properties in Dubai with the stolen money.

His accusers said that the property he bought with the “wayo” money worth more than 120 million naira. They accused him of conflict of interest. Specifically he was accused of using his position as the procurement officer to issue purchase orders and also be the purchaser himself through fronts. For example he was accused of issuing purchase orders for the purchase of new vehicles for the army but he (through his front) bought used vehicles for the army. If this is true, then, it is a treasonable.

This is a serious allegation against Buratai and he needs to show us why we shouldn’t believe the allegations.  This alleged fraud took place in 2013, and if you’ve been following what has been  going on in Nigeria, that period was a period where chopping was the order of the day. This would be interesting to check out.

Buratai should not just issue a statement and hope everything is fine. It doesn’t work that way.  Buratai must first show everyone that cares to listen that the said property was listed in his asset declaration form on his assumption of office as the COAS. He has to let us know his salary and prove that he made the money legitimately. Additionally, and most importantly, we need to know that, within that period, the vehicles purchased for the army were new and not re-furbished.  We know the difference between new vehicles and re-furbished vehicles, don’t we?

Also Sahara reporters mentioned a specific company called Baggash investment limited, does the COAS know this company? He should let us know if it’s true that this company has any link with him. Sahara reporters brought facts against the COAS, it is pertinent for Buratai to bring out his own facts to counter Sahara reporters. Throwing stories up in the air wouldn’t cut it for him.

Until then, the General is still enmeshed in this mess. If he believes this would go away, he should better forget it. President Buhari has enough enemies that would make this more of a distraction for him(the President).  Buratai has to come with his own facts and it has to be very quick.

For now, the ball is in General Buratai’s court. He must deal with it….Ewolewoo!!