You are here: Home / Chronicles / France massacres: When “good intentions” are not good enough… 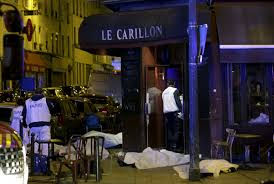 Yesterday there were coordinated terrorists strikes in Paris. The strikes resulted in horrific massacres. Over 150 people were dead as at the last count. This is quiet unfortunate and really sad. It has gotten to a stage that people have to pray whenever they are going out. They need to pray because they might not come back as what happened in Paris as shown.  People got blown up in restaurants. They got blown up in a concert venue they went for relaxation. They got blown up for going to watch a match at the stadium. It was that bad.

This is where this write-up would get a little controversial; The individuals who blew people up were Islamic jihadists (ISIS has already claimed responsibility) believed that they have the most valid interpretation of how Islam should be  practised. They believed that every western movement or style is against their ways of life. They have surmised in their minds that you either  “fight for God or die for God”.  They are ready to pull anything within their strengths to prove this point.  Do you know what? It would continue because it is an ideology. You cannot totally kill an ideology no matter how deadly. It is a mind-set that is accentuated by faith which makes it much more difficult to obliterate.

The problem you will have is believing that you can peacefully accommodate many people with varying (and sometimes  extreme) ideologies in the same space with you. It is a very combustible mix I tell you.  I know a lot would mention the US, but we all know better with recent happenings. Nomatter how you want to talk about it, some Muslims cannot stand Christians. Some Christians cannot stand Muslims.  Same with Buddhists and Muslims. Same with other religions. These things are there and no matter how good your intentions are, it would remain so.  If you try to push co-habitation too far in these days and age of internet, then you would always have all these problems and they would never stop.  Say all the good things you like, they would still be there.

It is difficult to successfully co-habit with people that have different religious philosophies and ideologies with you.  It is so difficult to do so.  A man with a different ideology could run into your country or home  and claim to be ready to accommodate your ways of life because of survival. After settling down in your country or home, he could be initiating his children into his own ideology which could be at variance with the host. The kids would then grow up feeling ‘alienated’. They have been told by their father that they should follow his way of thoughts. However, whenever they go out, they see something totally different from their thought processes. They then feel alienated and start looking for where to put their “tents” on. These are the people that ISIS or any other organization like them need. You only need few people to feel they have to be deadly to prove their points. It doesn’t need thousands to cause havoc, with few tens of people you can bring a town to his knees. It was shown yesterday in Paris.

Sometimes, it doesn’t mean that these individuals have bad characters at first glance. They could be very nice and affectionable  people to be with. However, the issue of faiths and ideology can change everything and they become monsters.  There are people that cannot blend with you and it is necessary that we all appreciate that.

The Europeans need to understand that  people are different.  Everyone might like to be in Europe because of the beautiful scenes and atmosphere. Everyone might want to have European passports because of the “opportunities” that are opened on that basis. However, not everyone is ready to forgo his culture and faiths for the Europeans’.  Not everyone is interested in imbibing the European moral values into his. Not everyone wants to go to Europe and behave like Europeans.  Infact there are people among the immigrants who want the Europeans to imbibe their own cultures. Accepting multicultural values is not necessarily everyone’s calling.

Europe has to either be Europe or dissolve into something else. You must have a country first and you must decide if people coming into the country are ready to be fully assimilated into the system.  People have to be made to understand the need to speak the languages and incorporate the cultures of the host country into their systems.  You have to know that everyone coming into your house is ready to accept the way you live and behave in your house. Anything to the contrary is just trouble. It is high time people understand this fact.

What you are seeing in Paris is a clash of civilization where some young people want a change of ideology quite different from the French ideology. You now have “states within states”.  It is sad but that is the reality.  Are the French and the Europeans ready for this? I don’t know…

May the souls of the dead rest in Peace…Ewolewoo!!