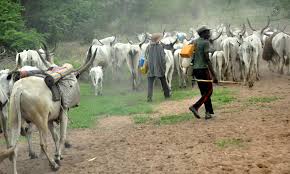 Suddenly Fulani herdsmen have turned to “powerful ghosts”.  Fulani herdsmen have become “powerful military force” that cannot be seen or located. They just come out of the blues to attack and maim then disappear just like that. They now have “military cantonments” scattered all over Nigeria where they plan and carry out their mayhem on the people.

They are so “powerful” that they can operate unhindered in Benue state and destroy Agatu town and environs. They have been operating in Nasarawa state. They are there in Plateau state. They are so strong and organized that they have brought their “armies” to the South. They are operating unhindered in Oyo state. I hope someone can still remember an army General who was killed along Lagos-Ibadan expressway by this same “herdsmen” over a year ago as we were told.

They are also operating with gusto in Ondo state. Chief Olu Falae would be ready to tell you more of that gist. Please don’t  ask him of the 100million naira arms gate issue. He has more gist on the “Fulani herdsmen powerful push” against him.

Now they are in Enugu,Ebonyi and Cross Rivers states. If you know what it takes to move weapons and fighters (not cows please) from the north to the south, you would appreciate how these “Fulani herdsmen” have grown. Sometimes they operate simultaneously in different locations in Nigeria. Some could be attacking in Nasarawa while another operation would be going on Enugu state. Yet they are supposed to be cattle dwellers.  Who is a fool?

What I am seeing as we speak is an organised insurrection by rebels who have been able to hide under the canopy of “Fulani herdsmen”. The rebels, from the reports flying around, could include boko haram renegades, other terrorists from West Africa, armed  robbers and other anarchists(which could be local to the particular area). They are using the normal “hit and run tactics” of rebels. These people are normal renegade fighters who are trained to destroy, without mercy, any civilian area that caught their fancy. They are ruthless and unforgiving in their brazenness. They are Boko –haram in another form.

The problem we have as we speak is this: Our security apparatus is not trained in fighting guerrilla warfare. Our police are not ready to acknowledge it. Our military struggles to fight with rebels. Our intelligence gathering apparatus is still steeped in the 20th century mode. The challenges of modern day security have overwhelmed them. They’re either unable or unwilling to adapt to the rapidly changing modern security scenario. I am seeing Boko Haram scenario in this instance. The security system in Nigeria must update itself in the interest of all.

President Buhari, while I understand the enormous challenges he is facing, needs to realise that the first duty of a commander-in-chief is to safeguard lives and properties of the citizens. He needs to put on the “General cap” in addition to being the C-in-C and face this problem. Nomatter the security reports he is receiving, what we are observing are medium scale rebel activities going on around the country. The earlier they are dealt with as such the better for everyone.

Yes we have Fulani herdsmen attacks, but what I see here are organized and supported armed insurrections by a group of disparate terrorists in various locations. I hope they can be tackled as such before everything develops into retaliatory tribal attacks which look like one of the goals….. Ewolewooo