You are here: Home / Chronicles / House of commotion, senate of confusion 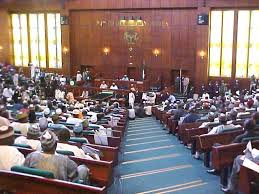 There are crises in the national assembly. The crises, I suspect, would not abate soon because the complications are mounting daily.

You have a Senate President(APC), but was ‘elected’ by the opposition party PDP. He was elected by 57 senators, 49 were PDP while 8 were APC members. Don’t ask me what happened to the other 50 senators. The truth that day was that: PDP would have chosen the Senate President if it liked but PDP decided against it. Instead a PDP inspired APC senator was picked. However, PDP was “magnanimous” enough to pick the position of the Deputy senate Presidency. Of course it has been problem all the way….

The way it is now, it is even more complex due to the fast developing issue of Forgery. The standing rules used in 2015 for the election of the senate President and the deputy Senate President have been found out to be forged. There was no senate that sat down to approve the standing rules it was discovered. This is a major issue as we speak because the other ‘parties’, caught in the wrong end of the “coup”, are baying for blood. They now have a criminal case to tie the leadership of the senate to. It is not an easy matter I tell you. Wahala dey o!!

In the House, it is simple. The Principal Officers are all of APC but were also PDP inspired. The PDP declared the candidates for the APC to be picked and they won. Full stop. The APC had other candidates but they didn’t win naadaa!! They faltered along the line but they are now fighting back in a most determined and deadly way. This is causing serious rift and it has taken a real toll on legislative duties I tell you.

The only individual that could have nipped the problem at the bud before the eruption would have been the President himself. However, in a strange manner that I find extremely curious, decided to let it play out. He, in my opinion, didn’t realise that he’s the person in charge and he would ultimately be held responsible for either the failure or success of this Government. He represents APC but I don’t think he totally believes in APC. It is a misnomer that the APC leaders of the legislative houses that he would be dealing with are “PDP inspired”. Infact they are PDP candidates. He also has a PDP deputy senate President to deal with in case the senate President is not around. If he counts this as “normal” then I have nothing more to say.

Will the Problems go away? I have my strong reservations. The only way to make this a no- issue is for the President to come out with what he wants and follow it through. If he continues with this convoluted ambivalence, then the problem of the legislative houses would surely continue…

I nor kuku call any name this time around o!! Ewolewoo!! #Ewolewoo!!