You are here: Home / Chronicles / Ifeanyi Ubah; The “bad” who wants to be “good”… 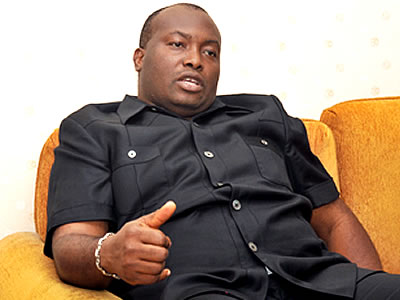 Ifeanyi Ubah, the chairman of capital oil limited resurfaced out of the blues a little over a week ago. He made some ‘consequential announcement’ as it related to the dollar-Naira exchange rates. He practically told everyone what many people know but couldn’t say about our economy.

He said that the naira was being manipulated by some interests and that he had the panacea to reduce the value to N200 to a dollar.  I really have to confess that what he said triggered the downward spiral of the dollars as it crashed from about N410 to N310 in a single day. That was really massive. You can say anything; but it was Ifeanyi Ubah’s bombshell effect.

Like you all know, Nigeria economy is a peculiar economy. If you try to apply the conventional economic principles to it, you would falter very badly. It has its own trajectory schedule that defies the logic of the Breton hoods economists. It has a style that is promoted in a manner that you’ll find very difficult to decode. The whole thing is being funded by crude oil sales which have crashed so badly that you would wonder how we would survive in the next one year.

However, Ifeanyi Ubah cannot come out to claim champion and expect people to trust him. He cannot expect trust from people who saw how he collected and chopped over 20 billion naira from Cosmas Maduka(Coscharis) on some phony  fuel importation deal. It’s difficult to trust Ifeayi Ubah when it took GEJ to settle the rift by involving AMCON in the whole show.  Involvement of AMCON in the melee saved both Ubah, Coscharis and Access bank from serious financial crisis due to this scam. In other saner clime, Ubah would be eating prison food by now. We all know that Nigeria is peculiar.

We know that he is part of the ‘chosen few’ who enjoyed the true meaning of “fuel subsidy”.  We also know that he has decided not to import fuel because the deal makers that funded his importation business are either out of Government or plainly decided to lie low.  Things are not looking too rosy for the man called ifeanyi Ubah. We sabi..

However, I have to admit on a fundamental fact that he knows the system. He knows how the system is being gamed. He is so street smart that he understands the “Mafioso style nitty-gritty” of the Nigeria economy. You don’t just get someone to loan 20 billion naira from a bank on your behalf if you are not a “Don” in your own right. You don’t get a president to ‘trust’ you for his presidential campaigns if you are not “on the ground”.  Ifeanyi Ubah, is a product of the wrapped system that Nigeria economy has become. With the way oil price continues to crash, it is only a matter of time before he gets the” listening ears” that he is looking for.  I can’t bet that he wouldn’t.

Ubah should know that many people don’t trust him. He should understand that any opinion, nomatter how noble,  that comes from him would be treated with utmost suspicion. Once you are perceived as a scammer, it is difficult to put trust on you in whatever you do. Unfortunately for Ubah, he is not looked at in good light once issue of trust is involved. The public would listen but with heavy doubts about his intentions.

Ifeanyi Ubah represents the meaning of “the more you look the less you see” in public eye. I know he would continue his “push” to be heard. However, his audience don’t trust him….Ewolewoo!!