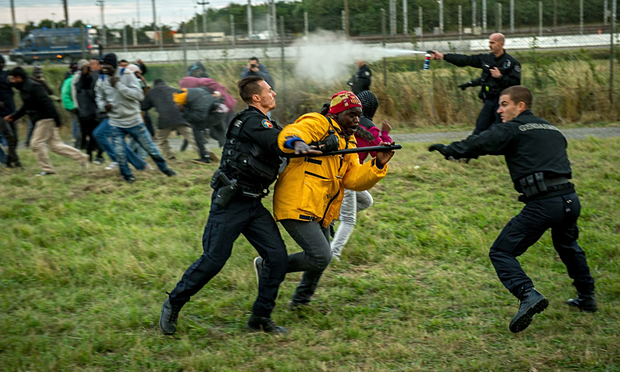 A lot on Nigerians know Walter Carrington street in Victoria Island Lagos. A lot know the place because they want to travel out of the country. Simply put, they want to get their Visas. That is supposed to be the way to go; I know a lot would say.

However, a lot also believe that travelling abroad does not necessarily have to entail getting a Visa to the intended country. They want to go there through “alternative routes”. They are not interested in the stress of showing lots of documents because they want 6 months UK Visa that they could even end up not getting. They nor wan hear about meeting one American at the embassy asking them funny questions because of Visa. To them, 6 weeks Schengen visa nor make sense. They want to get there as immigrants. Simple!! If you call it illegal immigrants na you sabi. Immigrants=immigrants, legal or illegal as far as they are concerned.

Google a place in France called Calais. Hundreds of people are there as we speak. They all want to get to the UK. They are already in France through Italy. How did they get to Italy? You all know how. They’ve got no travelling papers, no Visas, nothing. However, they’re in France, being “begged” to stay there but they want UK. The UK home office can continue their office work or continue speaking their grammar. These guys don’t need them. They must get to the UK. Of course they are just a tunnel away from Calais to Kent. If they could weather through the Mediterranean, wetin be tunnel? That is what is playing out. Say all you want, those guys are determined to get to the UK.

The truth is simple: That Nigerian boy in Calais or the Sudanese boy in Calais or that Eritrean lady in Calais, who wants to get into UK has a different figure about how the world looks like. They have a totally different interest from what some might want. Their realities have told them to follow a mantra that says; “ there will always be alternative to their mode of survival”. They only need to look for available “loopholes”, which have seen, and are using to the fullest extent. UK must be read for mammoths of undocumented migrants who don’t believe in paper work. They just want to survive. At this stage, a man who has nothing to lose yet desperate is the most dangerous around you.

There are many people that the system is turning overboard. It is either their issues are addressed and dealt with or you allow the burning issues to fester. The more the issues fester, the more the population of this set of people increases. Before you know it, they are already around your neighbourhood with their baggages. Then, you will have no choice than to include them as part of your problems. Wahala dey ooo!!! Ewolewoooo!!!