You are here: Home / Sport Mattas / Keshi is dead? But the man in him had died since….. 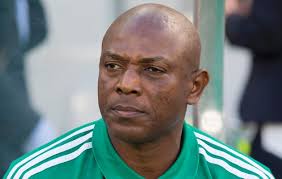 Stephen Keshi  is dead!  He just passed on at the age of 54.

I pray that his soul rest in perfect peace.  I pray that the peace that was denied him on this planet earth be restored back to him in heaven. I pray that the unwholesome attacks on his legacy by characters who never contributed anything to Nigeria football be watered away in heaven. This was a man who died before he died.

I am not going to come out with nice platitudes in this case. Stephen keshi was never treated well by the NFF and the media during his time as the national coach of the super Eagles. Everything was done to make him fail. Anything conceivable was stepped up to make him look bad in public. He was never appreciated by the NFA neither was he supported. He was totally messed up without mercy.

In 2013, Stephen keshi won the Nations cup out of nothing.  It was not that the NFF believed in him. The media never gave him any chance. Infact he was primed to be sacked during the tournament by the NFF as they were expecting Super Eagles’ ouster in the quarter final of the tournament. To make things more annoying, the NFF people had already commenced discussion with the coach of Zambia for the “soon-to-be- vacant” Super Eagle post. Unfortunately for them, keshi won the Nation’s cup and all hell was let loose.

NFF now wanted to be part of the Victory party that they never encouraged. When they couldn’t get that, they engineered a messy confusion within super Eagles.Keshi never had peace again. Payment of his salaries was deliberately delayed. Payment of match bonuses was a strange phenomenon in the estimation of the NFF people. It was so bad that the world cup campaign was wickedly sabotaged by this same NFF people and their supporters in the media.

Despite all these shenanigans, Keshi  got to the second round of the world cup before he lost to France. During this time, NFF had a catastrophic internal crisis that almost consigned the organization to the dust bin of history. Within this melee, Keshi’s contract had expired and the NFF people never wanted him again.  When they noticed that former President Jonathan still wanted him, they started playing games. A character like Amaju Pinnick(NFF President) was all the while talking about keshi in condescending manner.  As Jonathan left the seat, Pinnick found a way to mess up Stephen Keshi and he messed him up big time!!

Stephen Keshi who won the Nations cup as a player and as a coach was just treated like a chicken. He was driven out like an “adulterous woman without shame”. He was made to look so bad that I wondered if he would ever get a serious coaching job again. This was a personal loss to him I can tell you.  Another grave personal loss was the death of his wife.  Stephen keshi died when the system that he helped nurture treated him like a sum.

Keshi had his flaws, but he was a good man.  It’s unfortunate that he could be relegated to a non-starter by the same people who should have taken him as a legend. Keshi lost life before death came around.

Adieu Stephen Keshi.  Life can be so unfair sometimes..Ewolewoo!!