You are here: Home / Other News / Labelling a goat with Buhari’s name tag is a new low.. 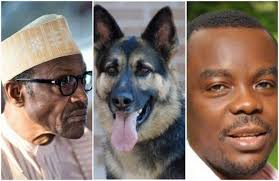 Joachim Iroko, aka Joe decided in his wisdom to look for trouble. Did he get it? Ofcourse he got it bigly. He decided to name his dog “Buhari”. To drive home the matter, he had the label of the name on his dog. Was that provocative? I bet he knew what he wanted to drive home.

Everyone knows that the intention of Joachim was not  only to provoke his neighbour, his ultimate intention was to demonize President Buhari whom he obviously hates with an undying passion. The assertion that one of his neighbour’s father name was Buhari could just be an afterthought to make it a local criminal case. However Joachim is no fool, he knew what he wanted to drive at. He was pointing at President Buhari.

He has now understood what it means to mock a sitting President in such low manner. He is now facing what he never knew existed for a fellow who dared to express his anger and hatred against the President with such provocation. This is a case that he might regret getting involved with as this issue could really drain him out of life’s meaning.

This is a very serious issue. It shows a pattern of disturbing developments that depict people who hate Buhari with a passion that is really strange. Some people have taken their hatred of him so personal that you would wonder  what is really involved in their hearts. To them, Buhari should not be respected as the president in any manner. To these guys, Buhari has to be eternally mocked in any ways possible.  Joachim is an example of Buhari’s hatred taken to a new low to provoke and demean in everyway possible.  This is not right.

I don’t deny the right of people to either like or dislike their leaders; however, caution needs to apply when displaying this. You should respectfully disagree with Government plans and intentions. You have the right to marshal your facts that show Government inactions. However, you do not have the right to deliberately provoke, with the intention to disturb public peace.  Joachim didn’t mind that provocation and that didn’t show good judgement on his part.

For now “Joe” now understands that there are consequences for some actions. For this act of his, he will face the repercussions. I pray he learns his lessons after this. There are some rights that are not absolute. He has sadly found out the kind of rights in this contest…Ewolewoo!!