You are here: Home / Other News / Lagos is on traffic lockdown!! Eko Oni baje o!! 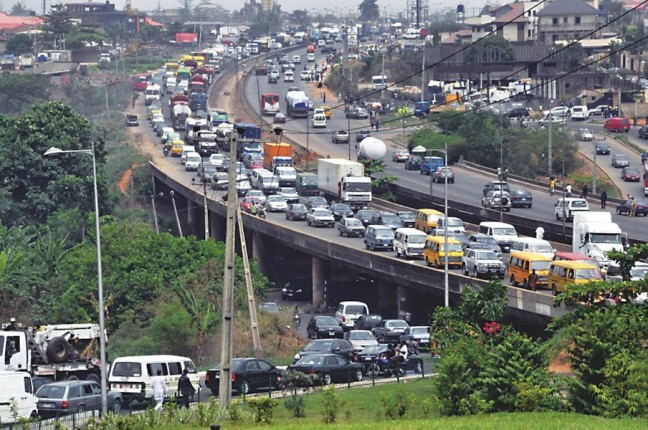 Sometimes in 2009, the Late president Yaradua granted Bi-Courtney the concession to handle Lagos-Ibadan expressway construction. Bi-courtney made lots of noise about how the road would be turned to a super highway to be proud of.  However in 2012 Bi-courtney was kicked out because they couldn’t do naadaa. They neither had the resources nor the expertise to accomplish the Job.

The road was re-awarded in June 2013 to a consortium of Julius Berger and RCC at the cost of 167 billion naira by former President Goodluck Jonathan.  This is a road of about 127 km, so we are talking of about 1.3billion naira per Km. This contract was supposed to be for a period of 4 years, meaning that it should be completed by 2017. We are now in 2015 November yet that road is better avoided sometimes than plied I tell you. Going to Lagos from Ibadan (or vice versa)  could raise someone’s BP on a very bad day. Those plying Redeem, Mowe, Ibafo to mainland or Lagos island on daily basis would have tales to tell you. When it rains, it could be another “wahala”. The story could be horrible on a really bad day.

Now coming inside mainland lagos is another story to behold. Movement from Ojota all through to Ojuelegba using the Ikorodu road could be nightmarish on a funny day. God saves you if a trailer truck breaks down or you have a motor accident (no matter how minor). You might be better having a lunch or dinner in your car in such instance. Managing the traffic in this part of Lagos could be a daunting task and it seems that the government is still in “thinking mode”.

The movement on 3rd mainland bridge is another interesting one. If you must get to the island from gbadada by 7am and you cannot wake up by 4.30am, then you might have only yourself to blame.  You need to drive through and see the standstill confusion on motorists dropping down to Bonny camp onward V.I.  You have similar scenarios begetting the ones using Onikan end “drop down bridge” to V.I too.  It would amaze you to know that it is almost the same wahala when going through the Ikoyi  end or Obalende.  This is what Fela  called “Confusion breaki  boonu  yepa. Double wahala for dead bodi…”’

Haaah!! On the island side the story is not too different. Driving from V.I to Ajah after 4.30pm could be a nightmare. You could start the build-up as far back as the toll gate end of V.I all the way to Ajah. It is not a tea party for road users in that corridor on a really interesting day. Driving to Ajah area could be very painful.

Making matters so worse is the unwillingness of the state government in constructing flyover/diversion bridges at each roundabout/intersection on that stretch of road. You have a 50km road without any bridge whatsoever which is tantamount to confusion.  Just imagine that there were no bridge at the national stadium on your way from Alaka to shitta. Think of no bridge at Ojuelegba when going to Palmgroove from Apongbon. Imagine no such bridge at Ikeja on your way to the MMA from Maryland. You can just imagine the total breakdown of movement as you drive along these routes. This imagination is the lots of road users on that VI-Ajah  stretch.

Moving along the Apapa route to Mile 2 and further down to Alaba and ajagbadi   is another story in confusion. Those areas have legendary traffic lockdown issues that have been well documented. More complicating in their case are the robbery cases in traffic. I am talking about life robbery dramas being witnessed on the road. You can see the “wahala”?

Going to Sango Ota through Abule egba and Agege from Ikeja after 5pm might demand a good prayer point. It has gotten to a stage in Lagos that every part of the state is becoming a “quagmire traffic colony”. It is no longer funny.

Ambode should be told that one important priority he must deal with is clearing the mess on the road. He doesn’t need to re-start. He needs to work with what is on ground and improve on it. Mind you Oshodi and Obalende are getting “cloaked” again because of his apparent “inaction”.

This is the time to eliminate the lagos lockdown Governor Ambode. The responsibility is yours!! However PMB must take the Lagos-Ibadan express way as a priority. The contract has been awarded so what is the problem with Julius Berger?  We need to move on…Eko oni baje o!!  ewolewoo!!