You are here: Home / Chronicles / “Let the “thieves” go home in peace”, so says the Niger delta Governors… 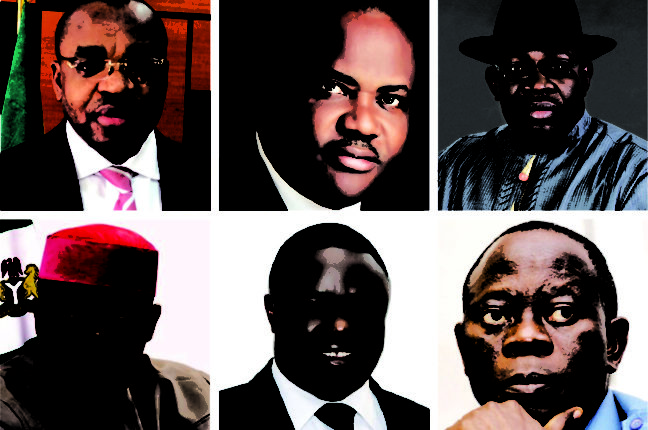 Do you know what? Durind the meeting of the Governors with VP Osibanjo, The Niger Delta Governors want the corruption charges dropped!! They said the militancy in the region is mostly as a result of corruption issues the Buhari administration has against many people in that area. The funny stuff is this: Ibe Kachiukwu(the present NNPC GMD and minister of state for Petroleum) wants it too. We are in it!!

If you have been following this blog, you shouldn’t be surprised at all. I have always said it that no one is interested in making Niger delta region grow in any sensible manner. No one wants that place to develop. The militants are not interested. The politicians in that area loathe it. If Ibori had been in Nigerian Jail because of his unconscionable looting of Delta state, His release would have been part of the demands of the militants. That is the peculiar situation we have found ourselves.

The essence of the militancy in the region is money.  Money for the boys is the name of the game. That money that should have turned Warri to Dubai must be shared. The money that could turn Yenogoa to Doha must be distributed. The money required to upgrade the status of Brass, Oporoma or Angiama to the status of London musty be looted without conscience.  No one cares and nobody wants to know. Just share the money.

You can see the way Deziani   singularly mopped up so much money and spent them the way she wanted. You saw how Deziani turned Managing directors of Banks to errand boys. You learnt how millions of dollars that would have done wonders to Yenogoa or Port Harcourt were shared into peoples’ bank accounts.  You all heard everything. Mind you, you never heard any outrage from critical quarters in that area about the kind of sleaze that went on.

Now I want the economic analysts to explain how a country can grow with this mindset? In Bayelsa state, the civil servants haven’t received their salaries for close to 5 months, yet we have Deziani with millions of dollars to share. If this is not related, then what else will be?

For now, the government must find a way to get in touch with the militants themselves and avoid the politicians. This is the only way to get something realistic in this game changing roller coaster of a drama. The politicians who are born thieves have now inserted their demands into the equation. Little wonder that area would be so difficult to develop. It is really sad

Getting directly in touch with the militants is the only way. Settling them in agreed terms acceptable to both parties is the only option. Further discussions with the Governors or politicians in that area would not work. You can see it, you can feel it…..Ewolewoo!!