You are here: Home / Chronicles / If Lula can be prosecuted in Brazil what about Jonathan? 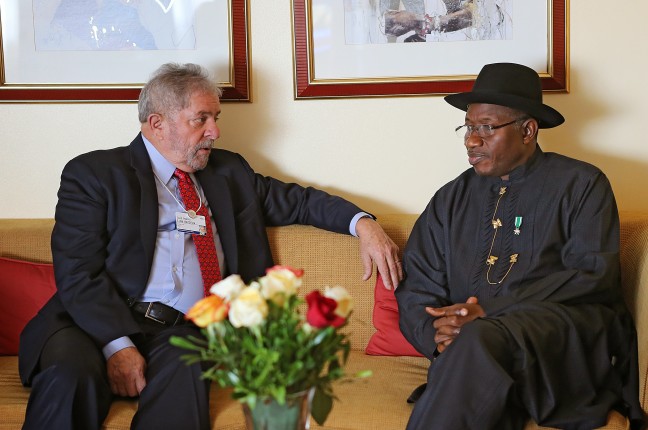 To make matters worse for him, he is also being probed for bribing and corruption as it concerns PETROBRAS( like our own NNPC). This particular case led to his initial arrest by the police.

Let me make this clear; Lula was credited for lifting millions of Brazilians out of poverty during his 8 years in Government. He was credited for some personal economic emancipation of many Brazilians during his presidency. I know these cannot be said of our past Presidents. However, as we speak, the man is in serious soup. He has his pants on fire. Wahala dey.

So how come our own former President Jonathan is having a sweet and quiet time in his house? How come his security Adviser(Sambo dasuki) is accused of chopping money but his boss is sleeping easy? How come it is easier to catch people that worked under Jonathan but he is just left alone? It is like catching many of Hitler’s henchmen but  leaving Hitler alone with his wife. If heaven didn’t fall because of the arrest of  Lula who did well for his people why would Jonathan’s be different?

We are all aware of the issue of US$20 billion that got “missing”. Was it a lie? If it was a lie, Sanusi should be taken to court for perjury and defamation of character. If it is not a lie, then, Jonathan cannot have a free pass now. Things don’t work that way biko.

So many atrocities that have been committed by NNPC cannot just be allowed to be swept under the carpet. The political authority that allowed NNPC to perpetuate this pure thievery cannot be given a pat on the back. We need to look at Brazil and learn a lesson or two about the true meaning of National patrimony. We need to look at the way the Brazilians are hounding Lula because he is accused of stealing. We cannot continue to shield leaders who have their hands in the cookey jar. This is never done..

Mind you,  the amount that was involved in this Petrobras wahala that has brought many political and bureaucratic  leaders in Brazil to their knees was not up to US$1 billion. However, you can see the way the Brazilians are making serious trouble on it. We can’t allow sentiments to becloud our judgement in looking at thieves like heroes. If you have stolen, you have stolen. Period!!

We cannot all be shouting that we want good things yet we are not interested in dealing with people that whacked us  without mercy. No country runs that way.

Lula is not sleeping easy, why is Jonathan still having it cool? It doesn’t work that way…Ewolewoo!!