You are here: Home / Chronicles / Magu’s non-confirmation: People’s intention is to steal!! 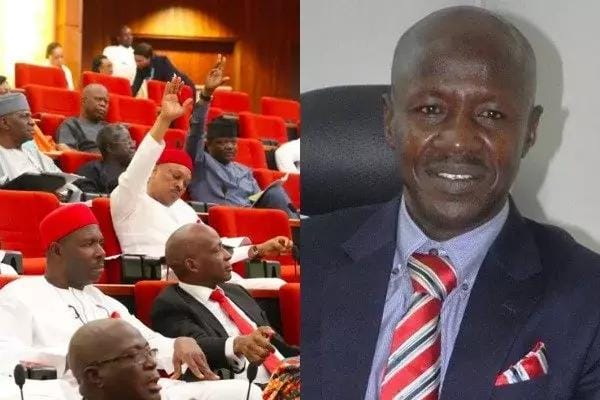 Magu could not be confirmed in the Senate because of one thing: People want to chop!

In Nigeria, Government(or public office) is the easiest route to being a billionaire and/or  a ‘respectable’  member of the society. The senate would never confirm him because we all know the reason. Forget the so-called DSS report. What report? Did the senate tell the Judges that the DSS accused of stashing millions of forex in their houses to step down? Didn’t the senate support the judges and even accused the DSS of overreach?  How come the DSS raid on the Judges, that time,was condemned by the senate? However the DSS report against Magu was taken as sacrosanct by the same senate. Why? Senate now chooses when to believe the DSS? We know the reason.

Does anyone really expect Saraki,who has a case of “apparent financial theft” against him, to support  Magu’s confirmation?  Or you expect the senators who have so many petitions against them with the EFCC  to confirm Magu? What of the Governors who mostly ‘own’ these senators? Do you expect these governors that Magu’s EFCC  practically called thieves, because of the alleged money they shared with saraki, to keep mum on his confirmation? That would be rich I tell you..

Magu is operating in a system where almost everyone wants to whack. Education or Academic qualifications play no role here.  The public Universities are in ruins as we speak because the VCs have mostly decided to be thieves. Leave grammar. The VCs want to live opulent lifestyles like the billionaires so nomatter the grants you send to the schools, they would end up as grammatical jingo. Just leave your comfort zone and visit any public university of your choice, you would wonder if they should actually be called universities despite all the money. Corruption is the system. The system is corruption.

Fighting barefaced stealing in Nigeria is like fighting the system. It is a difficult venture. When a man who is facing trial for not declaring billions of naira as his assets, is the decider of an integrity allegation against another fellow, then you can only imagine.

Magu just saw what it means to fight corruption in a system where corruption is its definition. If he thinks the public that have already accepted corruption as the norm would revolt, then he’s mistaken.

Lamorde: When delay can be dangerous..