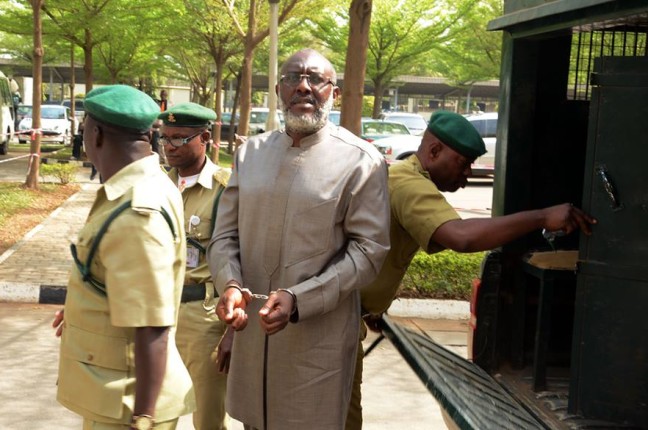 Olisa metuh must have regarded himself as a “very smart man”. He must have reasoned aloud and thought everyone in Nigeria is a “mugu”.  He would have imagined that all Nigerians are ready to let him be: Shebi na gofment moni..  Who would blame him on that?

The ground rules that make a suspected billionaire thief the victim has been changed in the particular court he was arrainged. He has found out that the Judge in his case only speaks ‘Russian’ and Metuh doesn’t understand ‘Russian’. The language is no more English that Metuh wants, it is a very different language. The judge has posted metuh on 400 million naira bail bond. The same money that Metuh wants to keep for himself. This man really thinks everyone nor sabi anytin.

With the benefit of hindsight now, Metuh would  know that it would have been better to negotiate his way out of the EFCC by bringing in the looted funds that he had admitted collecting. His preference to going to court is now backfiring on him in spectacular fashion. This is the only country where I see a suspect in a ”multi-billion naira criminal enterprise” preferring to go to court when he has an opportunity to negotiate his way out. It’s so strange.

Anyone who loves metuh should tell him that he is not in the custody of his “buddies”. Anyone who has anything to gain from a sane Metuh  ,should let him understand that the people on his case want the money he got without any government backed procurement papers. Metuh, should understand that the type of “rule of law” that he wants would not be the same as the type on offer on the road he prefers to go through. If he doesn’t bring the money, he wouldn’t sleep easy.

The fight against  wicked corruption by these individuals should be merciless. If you chopped people’s money without mercy then expect a reciprocal action when the repercussions beckon. A corrupt person, in the level of these characters, is a dangerous individual. Handcuffing such a person is right. These people don’t deserve the kind of pity I see on display for them. They’re  mean and wicked.

Let the Judges show rage to these people. The Judges should stop granting lenient bail conditions to these characters. Let them know that it pays to settle the money they stole than preferring to go to court. Metuh is beginning to find out that 400million naira is not a dash neither is it a ‘chop money’. He is getting it that he would pay back and of course he must….Ewolewoo!!

You can read more on Metuh on these links