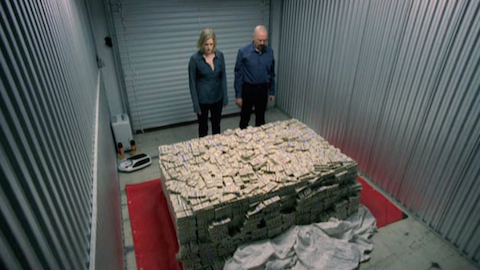 Money laundering is an act that is close by. It is something you see around you without noticing. It is a fact you could check out when you move around. Let’s check some cases..

When you walk around V.I and Ikoyi, lekki, FCT areas, etc  you would see lots of newly built high rise buildings “screaming” for “occupants”. They are still expensive despite being largely empty. The law of demand and supply (or market forces)doesn’t apply as the amounts for lease of the apartments are never lessened in anyway to attract people. The owners don’t care because the houses had to be built no matter what, because they couldn’t just allow the money to continue piling up at home. The money had to be spent. This is mostly the primary reason for many of the largely empty newly built edifices in those areas.

You go into some people’s homes. What you see are many newly bought customized cars. They are never used but always covered. This doesn’t stop these same people from acquiring new expensive cars in their largely unused fleet. I understand that some people love collection of good cars but this is different I tell you. There is a difference between someone who is engaged in collection of cars with his legitimate earnings and someone who is laundering with illegitimate money. The difference is clear. You only need to observe better. So next time you see something like this you only need to be “watchful”.

Yes, yes yes, another one is buying of private Jets. Unexplained moni over-plenti for hia o!! You’ve got lots of money flying around because trying to deposit the money in the banks would have raised lots of issues.  Buying of planes is now a new panacea for money laundering I tell you. People would come out with “justifying reasons” to support whoever is into this in a largely poverty stricken place like Nigeria but we sabi wetin dey happen. It is money laundering arrangement in most cases. The money has to be spent somehow as new money would soon come in so the idea of planes being bought is a very great one.You know buying of customized cars cannot zap all the money in the personal safe vaults to create space for the incoming or expected money.  You can now understand how things go.

If you are rich let us know what makes you rich at least I can pinpoint Bill Gates and Donald trump to mention a few. I know their businesses and the way they started is all there for anyone to see. In them, I saw  no government patronages. I saw no fronting for government people. I saw no collection, in whatever guise, of money from religious members, etc. The billions they made were clear cut and not hidden in a maze of confusion. Their entrepreneurship spirit was in display, Let our own show too,  That’s the way to go.

Money laundering is a problem here and we need to tackle it for common good…Ewolewooo!!!