You are here: Home / Sport Mattas / Mourinho and Wenger: Different strokes for…. 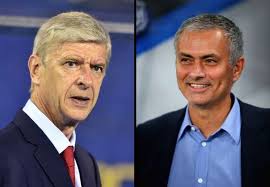 Two seasons ago Chelsea played a match against Liverpool FC at Anfield.  Chelsea won the game with a 2-0 score line. The issue was not that Chelsea  won the game, what happened was that the social media busted with accusations that Chelsea parked the bus. Infact a lot of commentators tried their best to outdo each other in talking about how the bus was parked. Some even called it double decker bus.  That victory was not given the right coverage it deserves. Chelsea parked the bus was the theme I tell you.

Fast forward to yesterday,  the match between Arsenal FC and Bayern Munich. Arsenal won the game 2-0 in similar fashion.  Many Congratulations to arsenal and her supporters!!  However, Arsenal parked the bus yesterday biko!!  Infact a situation in which Sanchez and Ozil were in most part of the game defenders summed up the match. Arsenal just sat back and looked for occasional forays which came. A match with 70% Bayern possession and 30% Arsenal possession in the emirates(arsenal’s home) would tell you how far the bus parking went. Just imagine a situation in which it was Chelsea that played that game yesterday,  do you think accolades would come if the results were same for Chelsea? Your guess is as good as mine.

Let us now move on to the goals that were scored. Just for a second, close your eyes and imagine that it was Diego Costa that scored the first Arsenal goal. It was a hand goal, remember? Just put Diego in that spot scoring with hand ball, what do you think would have happened? I can tell you it would have been “catastrophic”. The social media would have exploded with cartoons, mimics and other stuffs about a “cheating costa”. They would have forced UEFA to take a second look at the goal. It wouldn’t have been funny today o!! Bus parking + hand goal by a Chelsea team?  No one would be resting today I tell you.

Mourhinho called a referee “naïve and weak”? I listened to a sports station Brilla FM today where one of the analysts was blasting Mourinho for calling a referee “naïve and weak”.  If you troll the social media today, it is all over the media. I can tell you that the matter would not be settled until Mourinho is seen to be punished. I agree it is not good to criticize a referee. However, during the match between Chelsea and Arsenal, Wenger called a referee “naïve and weak” and nothing happened!! This was a clear punishable offence but naadaa happened!!  Infact the FA did all they could to appease Wenger and Arsenal beyond their imaginations. They  even reversed a red card that Wenger admitted was deserved by Gabriel.  It is surely different strokes for different people.

Chelsea played against Porto and lost. A deserved penalty kick was not given to Chelsea thereby costing Chelsea a point and giving Porto 3 undeserved points.  No one complained for Chelsea. No body raised any serious “reverberations” for Chelsea. Chelsea has been playing badly so they deserve to lose was the “sound track logo”. The match yesterday had a clear hand ball. The referee looked the other way thereby costing Chelsea 3 points. I have scrolled through the social media and I haven’t seen many people who would normally complain of “Diego costa’s crimes” or “Chelsea indiscretions “. They are not talking about this apparent “bias” because it is against Chelsea, haha wetin!! .  How do you expect a team to win when referees have made up their minds on what to do once there should be a call for the team? How?

Meanwhile I hail Arsenal again for defeating Bayern. However I hope and pray that whenever Chelsea played the same way Arsenal played against Bayern and won, the same analysis from Pundits and commentators should go to Chelsea too.  Don’t you think so?