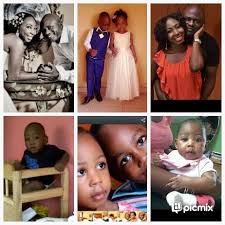 A man, Lekan shonde, killed his wife, Ronke,  in cold blood in Egbeda-Idimu area of Lagos state . He accused his wife of extra marital affairs and acted as a “macho man”. He murdered her and ran away. Thankfully he has been caught. To make the matter more uncomfortable, they have 2 kids together. These are very young kids with the elder not more than 6 years old.

Define it how you want, the kids have lost both parents. Many lives have been changed forever. This is the sad scenario that the families of the husband and his late wife are facing right now.

There are some questions that need answers; why would a man continue with a relationship that he believes is a torment to his life? Why would a woman remain in an abusive relationship that has reduced her womanhood to the barest minimum? Must you stay in a relationship, even though, your overall happiness has taken a back seat? At what point does the preservation of once life is disregarded, just because we want the world to be happy with us? Questions, questions, questions…

There has be a time in someone’s life where self-preservation becomes the watchword. The sad scenario of the man who took the life of his wife should be a real lesson to a lot of people who have funny disregard for themselves.  They believe their happiness doesn’t matter because of the perception of their families. They believe that their happiness makes no sense because of the way they would be looked at in church when they exit an abusive marriage. They have stopped being happy because their happiness has been entailed to another person in the relationship.  Does it make sense?

When you go into any offshore oil platform, you will see the inscription: Safety first. The safety issue is first to you. You’ve got to safeguard yourself first in the event of any unsafe scenario.  However, a lot of people are not ready to imbibe it once they’re in a relationship. Tell me who now gains when there’s murder of one’s spouse? Who gains? Is it the church that gains? Is it the families that gain? How about the kids, who have been left ajar, what is their gain? No one gains I tell you. Everyone loses when unhappy people cobble themselves together. This is really sad!!

What would lekan have lost if he quietly walked away? Would he be the guest of Panti police station right now? What would Ronke lose if she had just moved on? Would she be in the mortuary as we speak today? How about the kids? Would their lives have been torpedoed if one of their parents just followed the simple safety rule? How about their families, would they be in this mess that is on right now?

No relationship is made in heaven. If it works, we thank God for that. If it doesn’t, everyone should find his own level. It is far worse when murder becomes the story. At that point, everyone loses….ewolewoo!!