You are here: Home / Chronicles / Ngozi Okonjo Iweala: Sharing money for chop-chop is part of the job 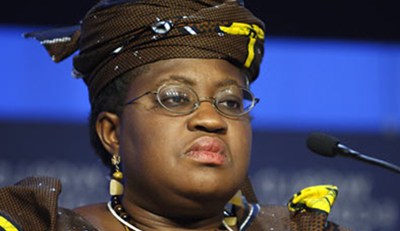 We had a Finance minister who also doubled as the coordinating minister of economy. However, she still tells us that she released money that she never knew how it was spent.

When there was 20 billion dollars that got missing. She said it was a lie that what couldn’t be accounted for was just 10.4 billion dollars. She casually told us that the missing details would be found.  End of story!! That was a “super Finance minister” talking. That is how to do “smart financial engineering”.

When the issue of 2.9 billion dollars of arms contact issue came up; She said she didn’t know anything about it. We had a finance minister who didn’t know about that kind of money passing through the system? That was a superb way of coordinating the economy from a super finance minister.

When the issue of the sharing of Abacha loot come on board she demurred.  As she was cornered, she said that 364 million dollars out of the loot was given to Dasuki to fight Boko Haram. Dasuki, being a ‘smart guy’,  just “whack” some and “distributed” the rest.  She is now telling us that she didn’t know how it was spent. To her, the way and manner the money disappeared should not be her concern.  This is an astute way of managing people’s money from a superwoman finance minister.

When Dasuki packed 9.3 million dollars into the Orisajafor’s private jet, she kept mute. She knew nothing, she saw nothing and she heard absolutely nothing. She wasn’t interested in the fallout and she felt immune. Please learn how to manage your finance as she has shown in glowing colours.

If you are a Financial controller of a company, a finance commissioner, a financial manager or involved in financial issues, Dr Ngozi Okonjo Iweala’s method of financial engineering is the way to go. The way she oversaw the management of our financial resources should be a course in advance financial degree.

So next time I ask you the answer to 1+1; If you say 1million or 1 billion then I would tell you that you are very “smart”. When you are asked about 5+5 just say 1 trillion and you will be scored 100%. That is the summary of the  gospel according to Dr Ngozi Okonjo Iweala, one of the “smartest “ financial experts on earth.

With this Finance minister,  Nigeria was really in “Eldorado”.  To tell you how smart she is, her minister of state;  Bashir Yuguda , is under arrest but the super minister of finance is still free.  She is still blabbing in the open. How else can smartness be defined?