You are here: Home / Chronicles / Nigeria Labour Congress and strike: sleeping, walking and crying at the same time. 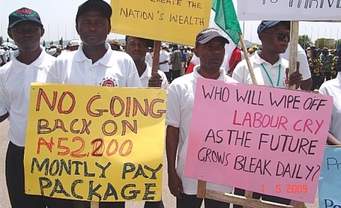 Firstly, Government is too ashamed, for whatever reason(s) to say she is broke. Due to this, a lot still believe that the financial scenario of 2012 and 2016 is the same. Added to this, is labour’s demand of 52,500 minimum wage. Na so o!!

Nigeria Labour Congress wants to go on strike tomorrow due to fuel price hike. Some people need to understand that this is 2016 and not 2012. When you realise that the difference between 2016 and 2012 is massive then you might look at things more objectively. Mind you, NLC is mostly for government workers as many industries have closed down. So it is mostly focused on civil servants. Yet civil servants are owed all over the states on #18,000 minimum wage. Is this not funny?.

I know for a fact that in 2012, not many states owed workers’ salaries.  In 2012, I am aware of the fact that the fuel subsidy allocation in the budget of 2011 was just about 250 billion naira but by 2012 over 2 trillion naira was spent on the subsidy. This never moved any needle against the system because oil price was selling at about $115/barrel. Money “berekete” that time. There was enough to fill “holes”… There was also enough to make NLC people “very happy” then before they suspended the strike.

In 2012, there were so many projects in the oil and gas sector that were aimed at maximizing the profit that arose from high crude oil price. The projects were flowing so were the jobs. The banks also enjoyed from this massive boom. More people were employed in that sector and more money saved in the banks. Of course, politicians and government guys had more money to steal and the system still absolved the shenanigans. Then NLC strike had more meaning to lots of people.

I remember when NLC told everyone to stock up food and brace for a long strike, that there was no qualms in doing so in any respect. Many people were liquid enough for that action unlike now.

Fast-forward to 2016, this is the year of confusion. The confusion has been building but we either didn’t see it or just living in self-denial. To start with, prior to Jan 2016, almost 30 states owed the salaries of their workers. The range was between 3 months to 12 months. It was hellish. When Buhari came out with the “so-called” bail-outs, the Governors just swallowed the money. The bailouts went to partially fill the holes generated by many Governors’ (not states!!) loans in the banks leaving the workers helpless and hopeless.

In 2016, oil price has already crashed. There was a time that it sold for less than $30/barrel.It is now  about US$45/barrel , yet we are still at a conundrum because we were not used to that price. The price that could cover our fixed expenditure is around $US100/barrel and more.

The fixed expenditure must be taken care of before talking about capital projects. That is always the style. I keep wondering how you can plan without money with you. Nigeria has the highest paid politicians in the whole world. The richest civil servants are based in Nigeria. This is the only country that being a millionaire or Billionaire doesn’t require the big thoughts of Bill gates, Donald Trump, Rupert Mudoch and others. It just requires you to be a public official and work your way up the system. Bingo! You are already buying the same yacht that Bill gates is thinking about. The system is with you. The system will support you. The curious thing is this: the system and her people are not ready to suffer the collective consequence of your corruption. Very funny!

NLC  has to pray that the crude oil price jumps up well enough to cover “many expenditures”. Government can pretend all it wants. The truth is this; NLC is lucky that Government is not retrenching anyone. If it were to be private business, and with the Government income as it is now, I doubt if 50% of NLC members would still be at work.

The earlier some people realise that Buhari would not, and cannot do much without money, the better for everyone’s good. You can never tackle a problem if you continue to live in self-denial of it. I really wish NLC well……Ewolewoo!!