You are here: Home / Chronicles / Nnamdi Kanu; A rebel caught in enemy’s territory. 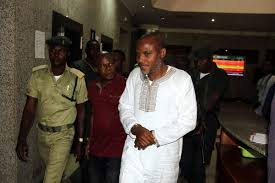 I have written something similar before which still remains relevant and factual.Nnamdi Kanu made a critical mistake. He was caught by his ‘enemy’ in the ‘enemy’s territory’. Why and how he allowed such thing to happen is still a mystery lost in the unfolding hysteria. Does Nnamdi Kanu really think that Buhari would just allow him go home in peace if caught? That’s the worst fallacy I have ever encountered in my observation of national events.

What Nnamdi Kanu wants is a breakup of Nigeria, simple! He wants the eastern section of Nigeria to secede and form Biafra. This would definitely put him in direct conflict with whoever is the Nigeria President. If you listened to Radio Biafra, he never ruled out violence to achieve that goal. In propagating radio Biafra, he confounded federal authorities by making use of some sharp telecoms engineers who made use of existing telecoms towers to broadcast and further propagate his messages. He instantly became Buhari’s no 1 enemy of state. That was the situation until he was arrested.

My point is simple, why did he allow himself to be so easily picked up? You cannot be propagating such messages and yet show yourself up in the streets and expect to be welcome by the opposing sides. He’s in deep mess as we speak because he’s in deep captivity of the people he has railed against with so much venom. That’s not a smart thing to do.

I don’t understand why people believe there would be a free and fair trial for someone in a hard-core enemy’s territory. The first question is this; what brought Nnamdi kanu back to Nigeria knowing fully well that he’s a wanted fellow? Secondly, what gave him the impression that his coming over would further any of the cause he was propagating? Surely with his present experience, he would have found out that he surely miscalculated.

For Nnamdi Kanu, being caught by people you wished dead is no tea party….Ewolewooo!!

Nnamdi kanu: Thou shall not be caught……

Biafra Agitation: A story so passionate but so often misplaced..

Biafra Agitation: A story so passionate but so often misplaced..