You are here: Home / Chronicles / Nnamdi kanu: Thou shall not be caught…… 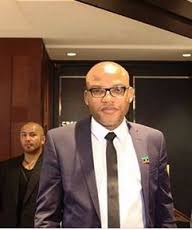 There’s an adage that says whatever you are doing make sure you ensure this fact: “don’t be caught’’. It is more unforgiving if you are caught by the enemy that you have despised without sparing any comprehension.   Once that happens to you, you are on your own. If you like speak all the available grammar you can muster, the fact still remains that you are on your own.

Nnamdi kanu, the leader of the indigenous People of Biafra(IPOB) and the operator of Radio Biafra failed that critical lesson. He failed that fact. He allowed “other pecuniary interests” that originally defined his modus operandi to come to the surface too early. He has deliberately entered the lion’s den and he’s crying for help. How that would work I don’t understand.

I remember 1994, when M.K.O Abiola was seriously  fighting for the realization of his mandate. He went somewhere in Ikeja and declared himself president-elect.  Abacha’s  people came around and MKO Abiola wilfully allowed himself to be spotted and arrested. That was the end of his mandate I tell you. Once you are in your enemy’s gulag, your territorial aspiration is over. Once you are caught, the ace is no more on your side; it is on the side of your traducers. Your ability to manoeuvre is as determined by your captors.

I knew Nnamdi kanu wasn’t serious with this Biafra agitation(http://ewolewoo.com/biafra-agitation-story-passionate-misplaced/) . I knew he was more driven by his hatred for Buhari than his love for the Biafra’s cause. I knew at a point he would silently crave for some form of negotiation for himself which has boomeranged on him.

Nnamdi Kanu failed the real test of his own belief. Nnamdi put himself in a complicated mission he is either not ready to follow through or just plainly seeking a personal bargaining chip. Unfortunately, he played it with people who are not ready to play ball with him.

You can read a similar article: http://ewolewoo.com/biafra-agitation-story-passionate-misplaced/