You are here: Home / Chronicles / NNPC and Saraki: Peculiarity defined by corruption 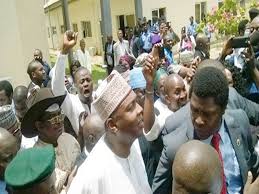 Yesterday, some youths under the aegis of “occupy Nigeria” invaded the national assembly in Abuja to demand that Saraki resigns. I applaud them. I hail them. This shouldn’t have happened if the institutions of enforcement in Nigeria have the will to enforce laws and prosecute big time crooks.  Saraki knows the institutions are weak so he’s less bothered. This has been the point all along. Corruption seems like an acceptable peculiarity.

Saraki is an accused person in a corruption case yet he is the head of the body making laws for Nigeria.  Infact the Senate of the Federal Republic Nigeria wants to sink or swim with him. Are we alarmed? Naaah!!  We are not because many Nigerians are no longer seeing stealing as a problem of the system. Instead, Nigerians are seeing the “politics behind the stealing” as the real issue.  Saraki  is aware of this confusion and he is manipulating it to the fullest.

Meanwhile on the fuel scarcity matter, you are all watching the rigmarole being performed by the NNPC in conjunction with NUPENG. Suddenly, Nigerians are no longer in control of what they have paid for. Let me explain further, the mere fact that we don’t have petrol exposes the uselessness of NNPC. It shows how incurably corrupt that organization has been. It has shown the hopelessness that NNPC has injected into the system. To make matters worse, Kachukwu, unfortunately,  has shown that his comfort zone lies in the Mobil house. He has either been indoctrinated into NNPC hall of infamy or just too scared of the “NNPC integrated mafia”. NNPC is holding the system to ransom and Nigerians are at the mercy of NNPC.

There is no way you can solve the fuel scarcity presently pervading the entire landscape if you still have the same individuals in control of different managerial level of the organization. It won’t work. Like I have always said; you either fight them or do “beta deals” with them. Unfortunately, President Buhari is neither fighting them nor doing “beta deals” with them. How an organization that is funded and maintained by the country becomes more powerful than the country is still a source of mystery to me.

Pick any newspaper and you will read the sleaze in millions and billions of dollars by the NNPC. Has  anyone in NNPC been arrested? Naah!! Did anyone lose his job? Naahh!!  Please save me the cosmetic sackings of various GMDs and the executive directors. It makes no sense. Once you are a manager(even very junior manager) in NNPC, you are in the know of “significant things” I tell you. It is an organization that has a powerful pyramid structure that at a point, you think less of your monthly salary and allowances. Money would come in from “different angles”. Define the “different angles” the way you want. Do you honestly expect this kind of mindset to change because of “morality or Godly sermons? Your guess is as good as mine.

I have written lots on NNPC that I wouldn’t want many repetitions. Buhari has to find a way to solve it because it won’t go away soon. Just check it out: Though I have conceded that NNPC cannot manage just 3 refineries. However,  NNPC is wholly(100%) importing petrol. NNPC and NUPENG are in charge of distribution of petrol. Crude oil price is very low. So how come we don’t have petrol?  I don’t need to be schooled in Harvard or Cambridge to understand where the problems lay. The problem is NNPC. Solve it and you would be sure of driving, swiftly, out of your filling station with petrol in your tank. NNPC is an example of a mere servant being far more powerful than the master. We have all become subservient to them. Sad!!

We have a peculiar situation in Nigeria. We’ve got a senate president who is accused of corruption but still, TOTALLY, in charge of making laws for us. We also have an organization like NNPC that is riddled with corruption but yet fully in charge of managing our crude oil export and fuel importation.

The most peculiar stuff about our situation is this: We still demand the best from them!  How it would happen, it’s still a drama we know but not ready to acknowledge… Ewolewoo!!