You are here: Home / Chronicles / Oil money: Use it for your own people at least!!! 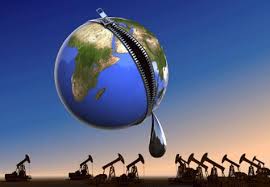 Abu Dhabi used to be a vast desert barely inhabitable some years back. Yes, it was really a place many would not dare to visit because a desert can be very hot and treacherous. Now as speak it has been transformed to a modern city with all the sophistication a good city can give.This did not come from heaven it happened here. The same scenario is replicated in Dubai. Na human beings do am. Dem nor come from Heaven. What money did they use to build these cities? Oil money!!

Let’s now come to Nigeria: Nembe,where the doomed helicopter(that killed the former NSA in 2012) took off from, to yenogoa is not up to 70km. However, to construct a simple road/bridge that would link the two towns(Nembe-Yenogoa) is a problem yet year in year out there are billions spent in bayelsa doing only God knows what. Please I am not talking about road contracts awarded to contractors, I am talking about completed projects linking the creeks with the capital.

Take a trip to Bayelsa and visit Yenogoa. It would be nice to check the amount that has gone to the state accounts with the projects on ground. Don’t let anybody bamboozle you with figures. It is easy to check out. You will wonder what happened to all the money that had been going to that state. To make matters worse, our Former President also happened to be a former Governor of that state. So you would ask a simple question: Couldn’t Yenogoa have been turned to bubbling “Dubai”? Is it not the same oil money? Let them take someone to court that he concentrated development to that area and we would understand issues arising from complaints on marginalization. Mind you the poverty in the communities cannot only be seen they can be felt and touched too. Forget the razzmatazz ooo!!

Also take a trip to Portharcourt and the adjourning towns. Move from there to Warri through Patani and Ughelli. Try your best to check the amount the states (Rivers and Delta &Bayelsa)have gotten from federation accounts in the last 6 years and look through the so-called Projects they’ve done. It would be clear that people just chopped and cleaned their mouths. To now imagine that a Niger deltan was the President within the 6 years in addition to the amount these states’ Governors  collected would tell you the scandal we are bedevilled with. If it could happen in Abu Dhabi and Dubai, why couldn’t it happen in Yenogoa, Portharcourt and warri? Why?? So wia the oil moni go? Let us hear that “the whole Nigeria money” during the last 6 years was used to turn these areas to Dubai and Abu dhabi. We go at least sabi wia d moni go..

What stops a high speed train service from lagos to ibadan?  what is stopping same from lagos to Ilorin? how about portharcourt to yenogoa or warri? These are no rocket science but it’s difficult because some people must “muscle that money”. Na wa o!!

ICPC said they are chasing civil servants who have become super rich. For everyone’s sake, ICPC should get these guys. EFCC must move and make the “big people” they have cases with appear in court. Let people be seen to be “dealt” with on account of these blatant stealing. For now, this is the starting point. Do we have any other choice?? I don’t think so…Ewolewooo!!