You are here: Home / Entertainment / Olamide vs Don Jazzy: A normal fight but I still like them. 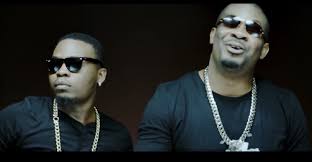 About 6 years ago, I remember young Olamide when he was just introduced by tonia payne( the former Nice wife and baby mama) as her artiste. She actually said that he would be a talented artiste. Olamide has shown the talent he has  by showing that there is a large number of people who like and identify with his music. He has grown beyond where payne could ever imagine. He don blow.

Don jazzy is another guy; he has shown that he is a producer of note. He has shown that as a producer, you deserve absolute credit for your work. In truth, it is the activity of someone like don jazzy that has opened the eyes of Nigerian producers to the fact that they could make good money off their works. Without Don jazzy, many producers would just be in the background with no glory and nothing in their pocket.

I watched the Headies where Olamide’s boy, lil kesh, lost to Reekado banks(Don Jazzy’s boy).  In my opinion, though,  I would have gone for kiss Daniel. However, I didn’t vote so I need not talk too much on that.

However, forget the rantings, forget the obscene words. Forget the fact that things were said by Olamide that shouldn’t have been said based on anger that he should have handled better.

The truth is this: Olamide has come from absolute nothing on the street of Bariga to become an icon in his trade. This boy fought through the embedded prejudices of the slum in that area to grow into a brand where he can be envied.  He has used his trade to become an entrepreneur. He never stole from government but he has brought street boys out of poverty and made them believe in themselves.  He has brought employment opportunities to people that government and her officials wouldn’t give a damn about. When you talk about creating value in your space, this guy in his little ways, has made a statement. In that I hail him for that.

Likewise Don jazzy has used his trade to bring people out of poverty into wealth. Guys that would have, ordinarily, been looked at “never-do-wells” are talking about getting brand new SUVs for their trades. This guy is creating employment in his little ways and I recognise that. He has made people to believe in themselves and what they are doing. When people create something out of nothing, they are the real gem. He is not a government official. He is not using government money to buy things. He is not stealing and sharing government money. He is creating wealth my people. When someone does this, I normally doff my hat for such individual.

I hail these boys anyday…. I hope it remains peaceful and gentle around you..Ewolewoo!!