You are here: Home / Other News / Egypt air flight disappears from radar!! 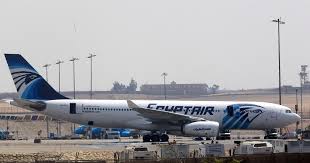 An EgyptAir flight carrying 66 people from Paris to Cairo went down into the Mediterranean Sea during the night in a mysterious crash that the Egyptian Prime Minister says may have been due to a terrorist attack.

No possibilities, including that of a terrorist attack, can be ruled out, according to Prime Minister Sherif Ismail, who stated that as yet very little information is available.

Sources from EgyptAir reported that at 2:26am, shortly before its disappearance from radar, the aircraft sent out an SOS signal, whereas another emergency signal was picked up two hours later at 4:26am. This later signal, according to the company, could have been sent by the automated location devices installed on the aircraft.

The captain of a mercantile ship claims to have witnessed flames on the sky during the night some 150 miles south of the Greek Island of Karpathos. His testimony led to the discovery of the plane’s wreckage in the area he described, just ten miles inside Egyptian territorial waters.

Flight MS804 left Charles de Gaulle airport at 11:09pm yesterday and disappeared from radar at 2:45am, just as it entered Egyptian airspace. The aircraft, an Airbus A320, was carrying 56 passengers, three security personnel and seven crew members. The majority of the passengers were Egyptians, as well as 15 French, a British, a Belgian, two Iraqis, a Kuwaiti, a Saudi, a Sudanese, a Portuguese, an Algerian, a Canadian and a citizen of Chad.

Experts have ruled out the use of portable surface-to-air missiles noting that the Airbus was out of the range of these weapons.

A possible scenario being advanced is that of a suicide bomber who could have placed a small explosive devise near one of the plane’s windows. The explosion at that altitude would cause a rapid decompression and easily result in the destruction of the aircraft.

Jean-Paul Troadec, former president of the French air accident investigation bureau (BEA), said there is “a strong possibility of an explosion on board from a bomb or a suicide bomber. The idea of a technical accident when weather conditions were good, seems also possible but not that likely.”

French Prime Minister Manuel Valls said that at this moment “no hypothesis” is excluded as to the possible causes of the crash.

French President, Francois Hollande, spoke Thursday morning by phone with Egyptian President Abdel Fattah Sisi, and the two reportedly agreed on a “close cooperation” to ascertain the circumstances of the disaster.