You are here: Home / Chronicles / Sahara Reporters: Inside saraki’s latest legal manueverings to frustrate his trial 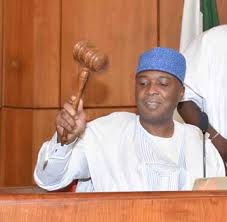 Mr. Saraki’s latest effort to thwart his trial began to materialize today when the Code of Conduct Tribunal granted him a weeklong adjournment after his legal team, led by former Attorney General of Nigeria, Kanu Agabi, claimed that he had filed a submission at the tribunal on March 4, 2016, challenging the tribunal’s jurisdiction to try the senator for corruption.

In a curious twist in today’s proceedings, neither the Secretary of the CCT nor the prosecutor, Rotimi Williams, was aware of the ostensible motion. Court processes require that all the parties to a case, as well as tribunal officials, must be informed of the kind of critical submission Mr. Agabi claimed he had filed.

Instead, a highly placed judicial source told SaharaReporters that Mr. Agabi’s so-called filing was illicitly handed to the tribunal judge, Danlami Umar, in Saudi Arabia where he had gone to observe the lesser hajj. Mr. Umar arrived back in Nigeria last weekend.

A lawyer familiar with the case told SaharaReporters, “Today’s developments [at the Code of Conduct Tribunal] smacked of a design to ridicule the process. The Supreme Court already reviewed the issue of jurisdiction in this case, and okayed the continuation of Dr. Saraki’s trial. So for a seasoned lawyer like Agabi to re-open the matter of jurisdiction was a mystery to me.”

Another legal source told SaharaReporters that Mr. Saraki new lawyers were also working quietly and reached an advanced stage in the motion they submitted at the Federal High Court in Abuja arguing that the continuation of the senator’s trial at the CCT amounted to a violation of his fundamental human rights.

Mr. Saraki’s case at the Federal High Court seeking again to nullify his trial is largely underreported, in part because the senator has compromised many of the judicial reporters following his trial. But a lawyer told our correspondent that the senator’s attempt to use the Federal High Court to scuttle his trial “should have been thrown out the moment the Supreme Court of Nigeria ruled against the Senate President who challenged the Court of Appeal which also ruled against him. Unless the [Federal High Court] judge wants to take the position that his court is superior to the Supreme Court.”

In fact, two lawyers told SaharaReporters that the judge in question, Justice Abdul Kafarati, was known in legal circles “for being susceptible to high-level corruption,” in the words of one lawyer. The judge had been found to have N2 billion in his account according to sources at the Economic and Financial Crimes Commission which he claimed to have made from farming. Justice Kafarati has fixed March 22, 2016 for his judgment on Mr. Saraki’s suit.

Our legal sources disclosed, that Mr. Saraki’s strategy was to delay the CCT proceedings until March 22nd, when he hopes the Federal High Court in Abuja would rule in his favor. “The delay which Chief Agabi secured for the Senate President at the CCT today, by again challenging the CCT’s jurisdiction, is part of a scheme to debate the frivolous matter [of jurisdiction] until the March 22nd ruling comes down.”

A lawyer who has followed the case said told SaharaReporters that he anticipated that, next Friday, Justice Danlami Umar of the CCT would take oral arguments and reserve his ruling till the following Friday. “The adjournment would enable Senator Saraki to get a favorable judgment from Justice Kafarati,” he said. He added: “The senator and his lawyers are banking on the scuttling of his case if they get the Federal High Court in Abuja to find that his fundamental human rights have been violated.”

In an earlier report, SaharaReporters revealed that Senator Saraki’s new lead attorney, Kanu Agabi, was the principal partner in a law firm that first hired Justice Danladi Umar of the CCT when he was a fledging lawyer. One lawyer suggested that the long-term relationship between Mr. Agabi and Justice Umar had already influenced the senator’s trial at the CCT, pointing out that Mr. Agabi had been able to secure two adjournments in questionable circumstances and to purportedly file a motion that the tribunal’s secretary and prosecutor did not know about. In addition, Mr. Agabi also succeeded  in prevailing on prosecutor, Rotimi Jacobs, not to file fresh charges that show that Mr. Saraki continued to receive his full salary as governor, several years after he left the seat.

SaharaReporters also learned Agabi was able to negotiate for trial dates not to fall on work free days at the Senate as Saraki and the horde of Senators that typically accompany him to the tribunal feared a backlash from Nigerians regarding their abandonment duties to attend to Saraki each time he has a case at the tribunal.

Mr. Saraki arrived at the tribunal today accompanied by more than 60 lawyers and at least 30 lawmakers.